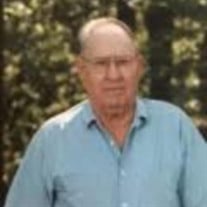 SSG (Ret) Bill J. Sumpter, 93, of St. Robert passed away December 7, 2021, in the Missouri Veterans Home of St. James, Missouri. Inurnment with military honors, Missouri Veterans Cemetery at Fort Leonard Wood, will be held at a later date. He served his country faithfully in the U. S. Army and Civil Service, retiring from both with over 40 years of dedicated service. He also volunteered for the Red Cross, VFW and was a member of the Masonic Lodge. Mr. Sumpter was preceded in death by his wife of 57 years, Jean M. Sumpter, one step-son, Jim Keeley, his parents and six siblings. He is survived by one step-son, Robert Keeley (Carolyn) of Phoenix, AZ, two step-daughters, Nancy Gebhardt (George) of Stanwood, WA, and Kathleen Mendias (David) of St. Louis, MO, and three daughters, JoAnn Tindall (Mark) of Holt, England, Stephanie Clouse (Tim) of Richland, MO, and Dawn Shimer (Carl) of St. Robert, MO, nine grandchildren and two great grandchildren. Bill J. gave his soul to the Lord on April 13, 2014, and was baptized shortly thereafter. “Eternal rest grant unto him, O Lord, and let perpetual light shine upon him. May his soul and the souls of all the faithful departed, rest in peace. Amen"

The family of SSG (Ret) Bill J. Sumpter created this Life Tributes page to make it easy to share your memories.