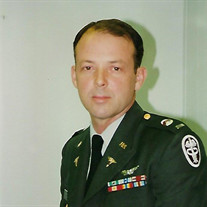 CPT (Ret) Billy Steven Church, son of the late Billy Verdain and Lola Ann (Johnson) Church, was born July 16, 1955 in Flint, Michigan. As a young boy, Steve grew up in Paragould, Arkansas and attended school. At the age of 17, he entered the United States Army and served his country faithfully until his retirement in 1996. He had attained the rank of Captain after rising through the ranks from an infantryman. For his faithful service, he earned several awards and commendations; some of which include: Army Commendation Medal 3rd Award, Army Achievement Medal 2nd Award, Army Good Conduct Medal 4th Award, National Defense Service Medal 2nd Award, Army Service Ribbon, Overseas Service Ribbon 2nd Award, and the Aircraft Crewman Badge. While in the military, Steve earned his GED and went on to further his education. He earned Associate of Science and Associate of Arts from Pikes Peak Community College, Colorado Springs, CO, Bachelor of Science Degree as Physician Associate with Distinction from University of Oklahoma City, OK, and Master of Science Physician Assistant Studies University of Nebraska, NE. After retiring from the military, Billy continued serving his country as a Certified PA and retired in 2017. On January 21, 2004, Steve was united in marriage to Sandra Lee Ellis. They shared over 14 years of marriage together and many wonderful memories. Steve was a very active man. He loved being outdoors; whether it was running or on the lake fishing or boating. He was a collector of Fender Guitars and enjoyed playing them. He was an avid Dallas Cowboy and St. Louis Cardinal fan. Steve loved his family tremendously and would do anything for them. He enjoyed spending time with them teaching them how to hunt, cut wood, play guitar and ski on the water and the snow. Steve had made a profession of faith and if you were to ask him what club or organization he belonged to, he would probably say “Club Jesus”. His greatest passion in life was Jesus and sharing the Gospel with others. He went home to be with his Lord Thursday, April 12, 2018 in the Phelps County Regional Medical Center of Rolla, Missouri after a short battle with cancer. He had attained the age of 62 years, 8 months and 27 days. Steve leaves to cherish his memory his loving wife: Sandra Lee Church of the home; six children: Jeremiah Steven Church Blackmon of Dallas, TX, Emily Lou Church (Amos) of Seattle, WA, Benjamin Steven Church (Kimberly) of Kampala, Uganda, David Holbrook Church of Denver, CO, Elizabeth Ann Trevor (John) of Charlottesville, VA, and Christian Ellis Church of Waynesville, MO; four step children: Jessica Sanchez-Lehrman (Jeff), Jocelyn Leigh Carter (Kristoffer), Jennifer Lynn Powers (Mike) and Casey Daniel Diotte all of Colorado Springs, CO; six grandchildren: Asher Griffin, Elias Steven, Eva Lynn and Ames Holbrook Church, Jordan Taylor Blackmon and Oriana Skye Uselton; seven step grandchildren: Claire Marie, Emma Grace and Gunner Gideon Sanchez-Lehrman, Corissa Leigh and Daniel Kenneth Carter and Benjamin Grant and Brianna Amelia Powers; one sister: Tina Gale Keller (Carl) of Berne, IN; other relatives and friends. Graveside services with military honors were held at 2:00 p.m. Wednesday, April 18, 2018 in the Missouri Veterans Cemetery of Waynesville, Missouri with Rev. Benjamin Church, Steve’s son, officiating. Military honors were provided by the United States Army of Fort Leonard Wood, Missouri. Services were under the direction of Memorial Chapels and Crematory of Waynesville / St. Robert. Memorial contributions may be made in memory of Steve Church and may be left at the funeral home.

CPT (Ret) Billy Steven Church, son of the late Billy Verdain and Lola Ann (Johnson) Church, was born July 16, 1955 in Flint, Michigan. As a young boy, Steve grew up in Paragould, Arkansas and attended school. At the age of 17, he entered... View Obituary & Service Information

The family of CPT (Ret) Billy Steven Church created this Life Tributes page to make it easy to share your memories.