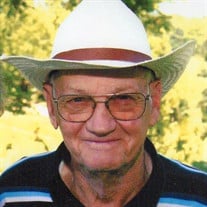 Billy Everett Coffman, son of the late Oren Wayne Coffman and Ruby Jane (Casebolt) Coffman, was born October 8, 1932 in Orla, Missouri near White Oak Pond. Shortly after graduating from high school, Billy married his high school sweet heart that he fell in love with the first time he laid his eyes on her, September 1, 1951. They shared over 66 years of marriage together and were blessed with four children, Carol, Sonny, Pam, and Debbie. Billy joined the Army on February 6, 1953, and served two years in Fort Bliss, Texas and was honorably discharged February 4, 1955. Billy received a good conduct medal, National Defense Service Medal, and retained the rank of SGT. Billy was a hardworking man and had wonderful work ethics. Billy started at Foremost Dairy and Palmers Furniture Company before entering the service. After the service, Billy went to work for the Dr. Hughes Veterinary Clinic where he worked for fourteen years. Then Billy went to work for the National Life Insurance Company, where he received yearly awards and trips. Then Billy went to work for the Missouri Department Employment Security where there he retired as auditor in 1994. Billy enjoyed being outdoors; fishing with friends, mowing his yard, and feeding and watching the deer come up in his yard. He took great pleasure in planting flowers, getting yard of the month, planting a big garden and canning all the can goods and jelly he could. He loved studying his Bible and most importantly, Billy treasured his family and spending time with them; especially the grandkids and great-grandkids, and raising his pet quail, Birdie. Billy went home to be with the Lord, Friday, October 6, 2017 at his home, attaining the age of 84 years, 11 months and 28 days. Billy will be sadly missed, but will always be remembered by all those who knew and loved him. Billy was survived by his loving wife: Velma Coffman of the home, one son: Sonny Coffman and his wife Carol of Anderson, MO; three daughters: Carol Estep and her husband, Lyman of Sparta, MO, Pam Russow and her husband, Danny of Rogers, Arkansas and Debbie Baranowski and her husband, Larry of Richland, MO; 10 grandchildren and 22 great-grandchildren; four brothers: Donald Coffman and his wife, Betty, Jimmy Coffman and his wife, Sherlene, Dean Coffman and his wife, Donna and Darrell Coffman, all of Lebanon, MO; several nieces, nephews, and other relatives and friends. In addition to his parents, Billy was preceded in death by his sisters, Helen and Clara Bell, one brother, Lloyd and one grandson, Travis Wayne Savard. Services were held at 2:00 p.m., Saturday, October 28, 2017 in the Eureka Baptist Church of Richland, Missouri with Pastor Doug Jacobson officiating. Billy’s favorite songs,"Only Gone From Our Sight” and “He Can Be Found” were played. Military Honors were provided by the American Legion Post 240 of Richland, Missouri. Services were under the direction of Memorial Chapel of Richland. Memorial contributions may be made in memory of Army Veteran, Billy Everett Coffman, Sr. and may be left at the Memorial Chapel of Richland. Online condolences may be sent to www.memorialchapelsandcrematory.com

The family of Billy Everett Coffman created this Life Tributes page to make it easy to share your memories.