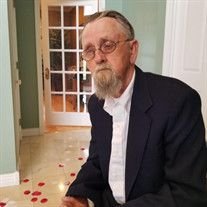 Billy Dean Fenton, son of the late William Bertly Fenton and Mary Ellen (Hance) Fenton, was born August 28, 1948 in Waynesville, Missouri. He passed away Saturday, May 16, 2020 in his home having attained the age of 71 years. As a young boy, Billy grew up in the Waynesville area and attended Waynesville schools. He began working at the Post Cab Company with his father at an early age. On June 13, 1974, Billy was united in marriage to Stephanie Ann Runtzel in Waynesville, Missouri. They shared over 45 years of marriage together and two daughters: Beth and Michele. Billy loved cars of all kinds, but especially Corvettes and hotrods. He worked in auto body, painting cars and detail them. He always took great pride in making the cars look the best they possibly could. Billy served the city of St. Robert for 17 years as a heavy equipment operator. In addition to loving cars, he also loved his Harley Davidson. Billy was a member of the Cave State Cruisers and the Harley Owners Group. He enjoyed being outdoors; so if there was a pretty day, you would find him out for a ride in one of his vehicles or on his Harley. Or you might even find him out hunting and fishing. He enjoyed shooting his guns and showing his grandchildren how to shoot properly and safely. Billy loved his family dearly and spending time with his grandkids was always the highlight of his day. He will be sadly missed, but fondly remembered by all those who knew and loved him. He leaves to cherish his memory, his wife: Stephanie A. Fenton of the home; two children: Beth Wood of Nashville, TN and Michele Carmack (Nathan) of Waynesville, MO; five grandchildren: Cody Fenton (Casey) of Watertown, TN, Dakota Wood of Lebanon, TN, Colten Carmack (Genevieve) of Waynesville, MO, Colby Carmack of Waynesville, MO and Chance Carmack (Hailey) of Waynesville, MO; four great grandchildren: Bryson, Sophia, Leo and Avery; one sister: Debra Baker (Terry) of Newburg, MO; one brother: Charles Fenton of Waynesville, MO; several nieces, nephews, other relatives and friends. In addition to his parents, Billy was preceded in death by three brothers: Charlie Hance, Jackie Fenton, and Donnie Fenton; and two sisters: Joann Simpson and Barbara Fenton. Services were held at 11:00 a.m. Wednesday, May 20, 2020 in the Memorial Chapels and Crematory of Waynesville / St. Robert with Pastor Danny Graves and Pastor Richard Breeden officiating. The songs “In This Life” by Collin Raye, “Outlaw’s Reward” by Hank Williams, Jr. and “Dancing in the Sky” by Dani & Lizzy were played. Serving as escorts were Cody Fenton, Colten Carmack, Dakota Wood, Colby Carmack, Chance Carmack, Chuck Ousley, Danny Crossland and Pat Fincher. Serving as honorary escorts were Jerry Brown, Steve Kelley, Bob Bunch and Danny Medley. Burial followed in the Sunset Memorial Estates Cemetery of Waynesville. Memorial contributions may be made in memory of Billy Fenton and may be left at Memorial Chapels and Crematory of Waynesville / St. Robert.

Billy Dean Fenton, son of the late William Bertly Fenton and Mary Ellen (Hance) Fenton, was born August 28, 1948 in Waynesville, Missouri. He passed away Saturday, May 16, 2020 in his home having attained the age of 71 years. As a young... View Obituary & Service Information

The family of Billy Dean Fenton created this Life Tributes page to make it easy to share your memories.