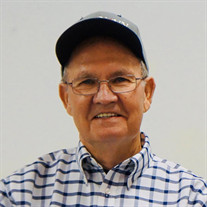 Billy Dean Walters, son of the late John Edward Walters and Ethel Marie (Hedrick) Walters, was born December 30, 1938 in Crocker, Missouri where he grew up and graduated from high school. In 1956, Bill accepted the Lord Jesus as his Savior and was baptized in water soon after accepting the Lord. He was a member and deacon of the Crocker Assembly of God Church for over 30 years. The past four years, he and Wanda had been attending Amazing Grace Fellowship Church in Crocker. On June 23, 1956, Bill was united in marriage to Wanda Mae Moore in Crocker, Missouri. They shared over 64 years of marriage together and were blessed with three children: Steve, Susan and Shelly. Bill was hardworking and took great pride in providing for his family. He drove a ready mix truck for a few years before becoming a business owner. He owned and operated Delano Station in Crocker for 30 years. He liked to mow grass and mowed for the church for many years. He was an avid St. Louis Cardinals fan and enjoyed watching them in person, on television or listening to the games on the radio. He also enjoyed a good fish fry and homemade ice cream. Bill loved his family tremendously and enjoyed spending time with them. He was proud of each and every one of his family. Bill went home to be with his Lord on Tuesday, September 29, 2020 in the Life Care Center of Waynesville, Missouri having attained the age of 81 years. He will be sadly missed, but fondly remembered by all those that knew and loved him. Bill leaves to cherish his memory, his wife: Wanda Walters of Crocker, MO; three children: Steve Walters (Barb) of Crocker, MO, Susan Vogeler (Bob) of Crocker, MO and Shelly Lazowski (Jason) of Clarksville, TN; six grandchildren: Kristy Burton (Jim) of Willard, MO, Kelly Hardaway (Todd) of Pacific, MO, Brian Vogeler (Hailey) of Eldon, MO, Alicia Daniels of Crocker, MO, Chelsea Baggett (Ethan) of Clarksville, TN and Austin Lazowski of Chattanooga, TN; eleven great grandchildren: Asher, Zach, Parker, Jace, Liam, Camden, Jameson, Grace, Kiera, Kiley and Bailey; three brothers: Bobby Walters (Janet) of Dixon, MO, Tommy Walters (Donna) of Richland, MO and Ronnie Walters (Janice) of Richland, MO; two sisters: Patsy Brumley (Emmett) of Crocker, MO and Sharon Ruth (Dale) of Crocker, MO; several nieces, nephews, other relatives and friends. Funeral services were held at 11:00 a.m. Saturday, October 3, 2020 in the Amazing Grace Fellowship Church of Crocker, Missouri with Pastor Rich Harris, Pastor Brian Vogeler and Pastor Todd Hardaway officiating. The songs “Beulah Land”, “Sheltered in the Arms of God” and “Take My Hand, Precious Lord” were played. Serving as escorts were Nathan Gilbert, Austin Lazowski, Brian Vogeler, Todd Hardaway, Ethan Baggett and Jim Burton. Serving as honorary escorts were Bud Pursley and Clinton Moore. Burial followed in the Assembly of God Church Cemetery of Crocker, Missouri. Services were under the direction of Memorial Chapels and Crematory of Waynesville / St. Robert. Memorial contributions may be made in memory of Billy Walters and may be left at Memorial Chapels and Crematory of Waynesville / St. Robert.

Billy Dean Walters, son of the late John Edward Walters and Ethel Marie (Hedrick) Walters, was born December 30, 1938 in Crocker, Missouri where he grew up and graduated from high school. In 1956, Bill accepted the Lord Jesus as his Savior... View Obituary & Service Information

The family of Billy Dean Walters created this Life Tributes page to make it easy to share your memories.