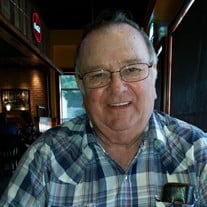 Bobby Gene Crawford, was born in Ravenden Springs, Randolph County, Arkansas, to the late Luchian and Geneva (Owen) Crawford on August 15, 1937. On January 18, 1956, Bob joined the United States Navy. He reported to Great Lakes, Illinois for recruit training. On completion he reported to Portsmouth, Virginia to serve on the USS Cambria, APA 36. He served on and put into commission, LST USS Wood County 1178 and was based at Little Creek, Virginia. He served as a base police at Memphis, Tennessee where he graduated from Memphis Police Academy. Bob served two tours in Rota Spain, first on the USS Canopus AS34, Submarine tender 1965-1969 and second at Port Department Naval Base Rota, 1971-1975. Between these Rota tours, he served in Vietnam on Mobile Base 2 at Tan-AN support and maintenance of PBR’s and advisor to Vietnamese Navy. Bob earned several awards; some of which include, Good Conduct Medal, Navy Unit Commendation, Armed Force National Defense Service Medal Vietnam Service Medal with 3 Bronze Stars, National Defense Service Medal. He retired in 1975 as Chief Petty Officer. On August 26, 1961, Bob was united in marriage to Sandra Lee Weldon of St. Louis, Missouri. They were married in St. Louis and were blessed with three sons. Bob served as a school bus driver for the Waynesville R-VI School District for one year before working with the Postal Service as a contract mail route carrier. He delivered the mail on the old Route 2 for over 21 years. Bob was a member of John J. Kestly Masonic Lodge #60 at NAS Rota Spain, an affiliate of the Grand Lodge of France. In his spare time, he enjoyed working on his place, especially in his garden. When his sons were in school, he coached their baseball teams. Most importantly, he loved his family and spending time with them. Bob passed away Tuesday, November 12, 2019 in the Missouri Veterans Home of St. James, Missouri having attained the age of 82 years. Bob will be sadly missed, but fondly remembered by all those who knew and loved him. He leaves to cherish his memory, his wife: Sandra Crawford of Waynesville, MO; three sons: Donald L. Crawford (Nancy) of Waynesville, MO, Rick E. Crawford of Sullivan, MO and Steven S. Crawford (Jean) of Crestwood, MO; two grandsons: Coty Crawford of Springfield, MO and Patrick Bobby Crawford of Crestwood, MO; one granddaughter: Lily Jean Crawford of Crestwood, MO; two sisters: DeWilla Catherine Elam (Leon) of Pocahontas, AR and Sharon Bearden Wilson (Russ) of Piedmont, MO; several nieces, nephews, cousins, other relatives and friends. Services were held at 12:00 p.m. Friday, November 16, 2019 in the Memorial Chapels and Crematory of Waynesville / St. Robert with US Navy Chaplain Doyl McMurry officiating. The songs “In the Garden” and “Amazing Grace” by Elvis Presley were played. Serving as escorts were the United States Army of Fort Leonard Wood, Missouri. Burial with military honors followed in the Missouri Veterans Cemetery of Waynesville with the military honors being provided by the United States Navy and the Missouri Honors Team. Memorial contributions may be made in memory of Bobby Crawford to the Fleet Reserve Association or to the Parkinson’s Disease Foundation and may be left at Memorial Chapels and Crematory of Waynesville / St. Robert.

The family of CPO (Ret) Bobby Gene Crawford created this Life Tributes page to make it easy to share your memories.