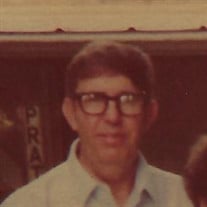 Bobby Gene Pratt, son of the late Henry Pratt and Sallie Ann (Fields) Pratt, was born May 16, 1934 in Viper, Kentucky. As a young boy, Bobby grew up in Jeff, Kentucky, which was a small mining camp. In 1955, he entered the United States Army and served his country faithfully until his retirement in 1975. During his time in the Army, Bobby earned several awards and commendations; some of which include: Good Conduct Medal (6th Award), Overseas Service Bars (4), National Defense Service Medal, Republic of Vietnam Campaign Medal w/60 device, Vietnam Service Medal w/1 Silver Service Star, Vietnam Service Medal w/1 Bronze Service Star, Army Commendation Medal, Republic of Vietnam Gallantry Cross Unit Citation w/Palm, and Marksmanship Qualification Badge M16. He had attained the rank of Sergeant First Class and served at different duty stations, including Fort Leonard Wood more than once. In 1968, Bobby moved to Missouri and after retiring from the Army decided to stay in the area. He then began working at the 28 Truck Port as a shift manager and retired in 1995 after 20 years of service. On May 27, 1982, Bobby was united in marriage to Gladys Laverne Sloan in Ocoee, Florida. They shared over 21 years of marriage together before Gladys preceded him in death in 2003. In his spare time, Bobby enjoyed taking care of his cats and dogs, working in his yard, just piddling, or occasionally you would find him out fishing. Bobby passed away Wednesday, March 17, 2021 in the General Leonard Wood Army Community Hospital of Fort Leonard Wood, Missouri having attained the age of 86 years. He will be sadly missed, but fondly remembered by all those that knew and loved him. Bobby leaves to cherish his memory, two stepsons: Glen Young of Clermont, FL, and Alvin Young (Patty Bowling) of Waynesville, MO; a number of nieces, nephews, other relatives, and friends. Funeral services were held at 2:00 p.m. Monday, March 22, 2021 in the Memorial Chapels and Crematory of Waynesville / St. Robert. Burial with military honors followed in the Sunset Memorial Estates Cemetery of Waynesville. Memorial contributions may be made in memory of Bobby Pratt and may be left at Memorial Chapels and Crematory of Waynesville / St. Robert.

Bobby Gene Pratt, son of the late Henry Pratt and Sallie Ann (Fields) Pratt, was born May 16, 1934 in Viper, Kentucky. As a young boy, Bobby grew up in Jeff, Kentucky, which was a small mining camp. In 1955, he entered the United States... View Obituary & Service Information

The family of SFC (Ret) Bobby Gene Pratt created this Life Tributes page to make it easy to share your memories.