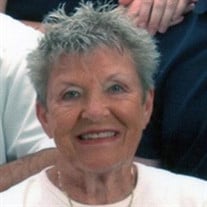 Bonnie Jean (Lewellen) Burger daughter of the late William J. and Mattalene (Bevan) Lewellen, was born October 2, 1924, in Kansas City, Missouri, where she grew up and attended school. Bonnie met Harland B. Burger, as High school students before the start of World War II. The two fell in love, and were married on February 28, 1942 in Olathe, Kansas, where the couple bought their very first home. Blessings from Heaven followed with the births of their three children, Harland B. Burger Jr., Douglas Glenn and Marie Elana. Bonnie lovingly took care of her home and family. After Harland’s passing on January 4, 1961, Bonnie entered the work force, later opening her own business making custom drapes. Bonnie also worked for JC Penny in the Custom Drape Department for several years. However, her life was always centered around her family. She was very proud of her family, they were her treasures. In her spare time Bonnie loved Bingo, bowling, playing cards, especially Solitaire. Bonnie loved growing and tending her flowers and had been part of the local Garden Club for many years. However, Bonnie most treasured times were spent with her family and friends. Bonnie passed away on the afternoon of Sunday, November 16, 2014, having attained the age of 90. She was lovingly surrounded by her family. Though she is gone from our sight for only a little while, she’ll live on in our hearts forever, as we treasure the memories made. Bonnie is survived by her two sons: Harland B. Burger, Jr. and Doug Burger and his wife, Judy of Lebanon, MO; 5 grandchildren: Stacy Wilson of Chapman, KS, Kevin Burger of Lebanon, MO, Jennifer Zimmerman of Long Lane, MO, Shannan Ashcroft of Kansas City, MO and Ken Hoover of Parkville, MO; 10 great grandchildren; 1 great-great grandchild; one brother, Bill Lewellen of Overland Park, KS; one nephew, and a host of other relatives and friends. Bonnie is preceded in death by her parents, her beloved husband, Harland, one daughter, Marie Elana Hoover, her sister-in-law, Betty Lewellen, and one nephew. A memorial service was held at 2:00 p.m., Thursday, November 20, 2014 in the Memorial Chapel of Richland with Rev. Christopher Hendrix officiating. Favorite music selections included “Amazing Grace” and “In the Garden” Services were under the direction of Memorial Chapel of Richland.

The family of Bonnie Jean Burger created this Life Tributes page to make it easy to share your memories.