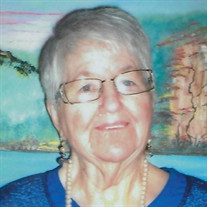 Bonnie Louise (Keeling) Schrimpsher, daughter of the late Claude Millard and Leta Agnes (Kimbrough) Keeling, was born April 24, 1934 in Fairview, Missouri. She went home to be with her Lord Friday, May 17, 2019 in the Life Care Center of Waynesville having attained the age of 85 years. At a young age, Bonnie moved with her family to Rocky Comfort and attended school there until the 8th grade. The family then moved to Neosho where she attended Neosho High School until they later moved to Stoutland where she attended Stoutland High School for her junior and senior year and graduated with the Class of 1952. The Class of 1952 formed a wonderful bond and they continued for several years to meet every Monday night for dinner at a local restaurant. On June 8, 1952, Bonnie was married to Ernest Carlton and they were blessed with three children. On October 31, 1967, Bonnie was united in marriage to Rolla Schrimpsher and they were blessed with one son. Rolla preceded her in death in June 1978. Bonnie took great pride in helping to provide for her family. She worked for a time at the Pulaski County Hospital where she trained as a nurse. She then worked at the family owned diner, Keeling’s Diner. During the time of her marriage to Rolla, they owned Rolla’s Ozark Motel. Rolla also served as a pastor and was pastor of Grace Baptist Church in Richland and later Hawkeye Baptist Church. Bonnie was very involved at each church they served, including Hickory Hills Baptist Church in St. Robert and Westside Baptist Church of Waynesville. She would also help at the Pulaski County Baptist Camp, serving meals and served on the executive board for the camp. Bonnie was currently a member of the Westside Baptist Church where she started the single ministry “Mid-Mo Christian Singles”. She served as the director of the singles Sunday School class and also served on the church council. She sang in the choir for many years and in her words, she “loved to sing praises to God”. She loved to introduce people to Jesus everywhere she went. Before her health began to decline, she would tell Bible stories at Christmas On the Square, worked at Judgement House and went to a weekly Bible study at Primrose. In her spare time, Bonnie was a member of the Tuesday morning Coffee Bowling League and delivered Meals on Wheels at Thanksgiving. She loved going to the Waynesville / St. Robert Senior Center every day where she would eat lunch and visit with her friends. She also enjoyed playing games, although she was very competitive, so you had to be prepared to play with Bonnie. She also enjoyed going to all her grandchildren’s sporting events. Bonnie was an avid St. Louis Cardinals fan and looked forward to every game she could attend, watch or listen to. Bonnie loved her family tremendously and loved getting to spend time with them. She will be sadly missed, but fondly remembered by all those that knew and loved her. Bonnie leaves to cherish her memory her children: Rick Carlton (Alice) of Dixon, MO, Terry Helton (Steve) of Plato, MO, Tammy Milligan (Danny) of Dixon, MO and James R. Schrimpsher (Theresa) of Eatonville, WA; seven grandchildren: Bronson Helton (Kim), Cole Anderson (Terri), Jarad Milligan (Joni), Brody Helton (Leslie), Niki Kelsay (Jared), Rebecca Schrimpsher (Austin), and Rolla James “RJ” Schrimpsher; six great grandchildren: Cy, Jara, Elliet, Barett, Dalton and Kori; three siblings: Melba Harrington of Republic, MO, Dale Keeling of Dixon, MO and Billy Keeling of Ashland, MO; several nieces, nephews, other relatives and friends. In addition to her parents and husband, Bonnie was preceded in death by two brothers: Winfred and Floyd Keeling. Funeral services will be held at 2:30 p.m. Sunday, May 19, 2019 in the Memorial Chapels and Crematory of Waynesville / St. Robert. Burial will follow in the Oaklawn Cemetery of Richland, MO. Visitation will be held from 1:00 p.m. until time of service at 2:30 p.m. Sunday, May 19, 2019 in the Memorial Chapels and Crematory of Waynesville / St. Robert. Memorial contributions may be made in memory of Bonnie Schrimpsher to the Waynesville / St. Robert Senior Center, Life Care Center Activities Fund or the Pulaski County Baptist Camp and may be left at the funeral home.

Bonnie Louise (Keeling) Schrimpsher, daughter of the late Claude Millard and Leta Agnes (Kimbrough) Keeling, was born April 24, 1934 in Fairview, Missouri. She went home to be with her Lord Friday, May 17, 2019 in the Life Care Center of Waynesville... View Obituary & Service Information

The family of Bonnie Louise (Keeling) Schrimpsher created this Life Tributes page to make it easy to share your memories.