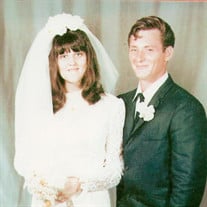 Bonnie Robinette Wilson, daughter of the late Harold Kenneth and Bonnie Robinette (Aldrich) Alkire, was born January 13, 1952 in Dayton, Ohio where she grew up and graduated from high school. In 1967, Bonnie met the love of her life, Edward Ernest Wilson and they were united in marriage on July 26, 1969 in Dayton. They shared over 44 years of marriage together and were blessed with one son, Ed. Shortly after Bonnie and Edward were married, they moved to Greenfield, Indiana until March of 1983. At that time, they moved to the Waynesville, Missouri area and established Ed Wilson Automotive which is still being operated by their son, Ed. Bonnie had the privilege of staying at home and taking care of her family, although she did help with the family business. But she loved taking care of her family and spending time with the “kids” and was totally devoted to them. She was known by all the kids as Mamaw. Bonnie loved taking care of her chickens, ducks and dogs and working in her flower gardens. Bonnie passed away Monday, April 18, 2016, in Phelps County Regional Medical Center, of Rolla, Missouri having attained the age of 64 years. She will be sadly missed, but fondly remembered by all those that knew and loved her. She leaves to cherish her memory, her son, Ed Wilson, of Waynesville, MO; her granddaughter, Rachel Wilson of Rolla, MO; her mother, Bonnie Alkire, of Waynesville, MO; three brothers, Ralph Alkire of Success, MO, Ronnie Alkire (Nancy) of Dixon, MO, and Raymond Alkire (Patty) of Montreal, MO; her sister, Emily Cordale of Dayton, OH; a number of nieces and nephews; as well as a host of other relatives and friends. In addition to her parents, Bonnie was precededin death by her husband: Edward Wilson; one grandson: Cody Edward Wilson; and one brother: Kenny Alkire. Services were held at 12:00 p.m. April 21, 2016 in the Memorial Chapels and Crematory of Waynesville / St. Robert with Pastor Chris Hendrix officiating. The song “Amazing Grace” was sung and Bonnie’s brother, Ralph recalled his wonderful memories of Bonnie. Serving as escorts were Ronnie Alkire, Ralph Alkire, Sr., Ralph Alkire, Jr., David Alkire, Raymond Alkire and Justin Alkire. Burial followed in the Goodall Cemetery near Newburg, Missouri. Memorial contributions may be made in memory of Bonnie Wilson and may be left at the funeral home.

Bonnie Robinette Wilson, daughter of the late Harold Kenneth and Bonnie Robinette (Aldrich) Alkire, was born January 13, 1952 in Dayton, Ohio where she grew up and graduated from high school. In 1967, Bonnie met the love of her life, Edward... View Obituary & Service Information

The family of Bonnie R Wilson created this Life Tributes page to make it easy to share your memories.