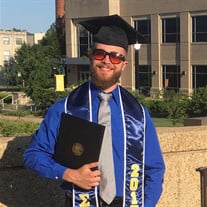 Brennan Matthew Kristek, son of Charles Matthew Kristek and Katrina Daveen (Campbell) Schram, was born November 22, 1993 in Springfield, Missouri. As a young boy, Brennan grew up in the Waynesville area and graduated from Waynesville High School. He continued his education by attending Missouri University of Science and Technology and graduated with a Bachelor’s Degree in Computer Science and Computer Engineering. He was an alumni of Sigma Chi, Rolla Chapter. Brennan served in many different capacities during his working years. While in college, he served as a Resident Assistant in Quadrangle Hall and Thomas Jefferson Hall before becoming the Senior Resident Assistant at Thomas Jefferson Hall. He also served in Student Affairs; as a Director of Promotions for the Student Union Board at Missouri S&T and also as a Peer Involvement Advisor. He worked as a professional services intern at McKesson in Springfield, Missouri before beginning an internship for Walmart in Global Sourcing Management. After graduating from Missouri S&T, Brennan began working for Wal-Mart Corporation in Rogers, Arkansas where he has served the past two years as a software programmer. In his spare time, Brennan was a member of the Arkansas Gryphons Rugby Club and enjoyed the comradery with all the other rugby players. He also loved to be outdoors, especially while snowboarding and skiing. Most importantly, he loved his family dearly and enjoyed getting to spend time with them whenever he could. He will be sadly missed, but fondly remembered by all those who knew and loved him. Brennan passed away Saturday, October 12, 2019 as a result of injuries sustained in a motor vehicle accident having attained the age of 25 years. Brennan leaves to cherish his memory, his mother: Katrina D. Schram and her husband Bill of Springfield, MO; step-mother: LeAnne Kristek of Waynesville, MO; brother: Nathaniel Schmitt of Louisville, KY; step-brother: Eriq Kristek of Waynesville, MO; two sisters: Cat Kristek and Grace Kristek, both of Waynesville, MO; grandparents: William and Jane Kristek of Springfield, MO, and Larry and Debbie Patterson of Fordland, MO; step-grandmother: Pat Ransdall of Waynesville, MO; girlfriend: Raven Taylor of Rogers, AR; several other relatives and friends. Brennan was preceded in death by his father, Charles Matthew Kristek. Even though he is gone from our sight, Brennan’s smile and kind heart will live on in our hearts forever. Services were held at 11:00 a.m. Thursday, October 17, 2019 in the Waynesville United Methodist Church of Waynesville with Chaplain Patrick Moore officiating. Brennan’s mother Katrina Schram recalled her wonderful memories of her son. Pianist Cheryl Wood accompanied Soloist Christiana Ball as she sang “Amazing Grace”, “True Colors” and “Hallelujah”. Serving as escorts were Nathaniel Schmitt, Eriq Kristek, Devyn Hard, Sanje Brothers, Caleb Hasan and Kyle Creach. Burial followed in the Sunset Memorial Estates Cemetery of Waynesville. Services were under the direction of Memorial Chapels and Crematory of Waynesville / St. Robert. Memorial contributions may be made in memory of Brennan Kristek and may be left at Memorial Chapels and Crematory of Waynesville / St. Robert.

The family of Brennan Matthew Kristek created this Life Tributes page to make it easy to share your memories.