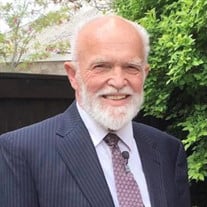 CW 3 (Ret.) Brian Dean Hill (b. August 15, 1943) left this mortal life on February 13, 2021. He is survived by his wife: Doris Hill of Dixon, MO; ten children: Reinhold Hill (Nell Rose) of Columbus, IN, Richard Hill (Patricia) of Huntsville, AL, Christopher Hill (Michelle) of Columbia, MO, Brian Hill, Jr. (Patricia) of Columbus, GA, Sonja Johnson (Ernest) of Broken Arrow, OK, Jonathan Hill (Jana) of Savannah, MO, Tanya Staples (Tyler) of Issaquah, WA, Timothy Hill of Dixon, MO, Katya Newberry (Travis) of Ft. Carson, CO, and Nadia Ortega (Daniel) of Nixa, MO; thirty-six grandchildren; fifteen great grandchildren; two sisters: Karen Glick and Diane Anderson, both of Salt Lake City, UT; several nieces, nephews, other relatives, and friends. Brian was a Vietnam veteran who served in the U.S. Army for more than 20 years with distinction. Among his many military awards and honors are the Legion of Merit and the Meritorious Service Medal. His many assignments in the Army allowed him to take his family across the United States and throughout Europe. After his retirement from the Army, he worked as a schoolteacher in Dixon, Missouri, and as an over-the-road truck driver. Brian was an avid cyclist, passionate gardener, and casual adventurer. His over-the-road driving allowed him to combine his passion for driving and travel with his work. He enjoyed exploring the side roads and byways of America. Brian also loved his wife’s homeland of Germany and would travel there every chance he got to visit his extended family there, enjoy German food, and speak the language he learned as a missionary for the Church of Jesus Christ of Latter-day Saints in Germany. Brian lived a life of service to his country, his church, and to his family. He most recently served as a branch president for the servicemembers branch at Ft. Leonard Wood, Missouri, where he and Doris were able to share their love for the soldiers and for the gospel with those with whom they worked. Countless are the stories of Brian helping others with their cars or other needs. He found his greatest joy in this life spending time with his large family, including on long bicycle trips across the country, in his garden, in his church service, and in his travels. Visitation will be held from 12:30 – 1:30 p.m. Friday, February 19, 2021 in the Memorial Chapels and Crematory of Waynesville / St. Robert. Private family graveside service with military honors will be held in the Missouri Veterans Cemetery of Waynesville, MO. Arrangements are under the direction of Memorial Chapels and Crematory of Waynesville / St. Robert. Memorial contributions may be made in memory of Brian Hill and may be left at Memorial Chapels and Crematory of Waynesville / St. Robert.

The family of CW 3 (Ret) Brian Dean Hill created this Life Tributes page to make it easy to share your memories.