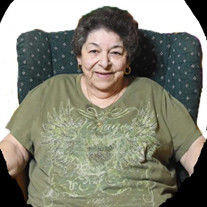 Brigitte Elfriede Moorhatch, daughter of Ferdinand and Friederike (Reinwald) Pfeiffer, was born August 19, 1943, in Znaim, Czechoslovakia. She departed this life Monday, November 30, 2020, in Phelps Health Hospital in Rolla, Missouri, at the age of seventy-seven years, three months and eleven days. On December 31, 1963, in Bad Kissingen, Germany, she was united in marriage to Theodore James Moorhatch. They shared thirty-seven years together before his passing in 2000. To this union three daughters were born. She was also preceded in death by her parents and several brothers and sisters. She was born in Czechoslovakia and her family moved to Heidelberg, Germany when she was three years old. At the age of twenty she met and married Theodore, a U.S. Army Soldier who was serving in Germany. They became a military family moving from base to base until 1980 when the family moved to the Fort Leonard Wood area. She was employed by AAFES at Fort Leonard Wood where she worked in the Running Chef, Bowling Alley and PX. After 35 years of service, she retired in 2017 from AAFES, all the time being a devoted wife and mother to her family. In her spare time she enjoyed oil painting, growing and arranging flowers, gardening, bowling and caring for her animals. Brigitte leaves to cherish her memory, three daughters, Anita Place (Terry) of Clarksville, TN, Carmen Halliburton (Scot) of Wasilla, AK, and Samantha Marler (Harold) of St. Robert, MO; eight grandchildren, Nicole McLeskey (Josh), Jennifer Burress (Ian), Ashley Cordes, Tamela Cronan (Gerald), William Halliburton (Tamara), Leeorah Schenck (Sonny), Dustin Marler (Annabel) and Caitlyn Marler; sixteen great-grandchildren, James, Summer, Matthew, Siobhan, Niall, Dream, Raven, Sterling, Evelyn, Emma, Alina, Brysin, James, Elliot, Rylee and Abree; a number of nieces and nephews ; as well as a host of other relatives and friends. We celebrate her life and the memories she created for her family and many friends. She will be fondly remembered and greatly missed and will live on in our hearts forever. Graveside services were held at 1:00 p.m. Thursday, December 3, 2020 in the Sunset Memorial Estates Cemetery of Waynesville with Pastor Richard Breeden officiating. Services were under the direction of Memorial Chapels and Crematory of Waynesville / St. Robert.

The family of Brigitte Elfriede Moorhatch created this Life Tributes page to make it easy to share your memories.