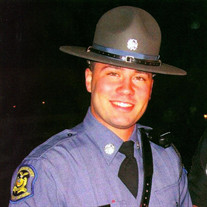 Brock Andrew Vogt, son of Steven Francis Vogt and Ellen Kay (Curtis) Brown, was born January 4, 1984 in Jefferson City, Missouri. He passed away Monday, October 31, 2016 in the University of Missouri Hospital and Clinics of Columbia, Missouri having attained the age of 32 years, 9 months and 27 days. As a young boy, Brock grew up in the Newburg / Doolittle area. He attended Newburg Elementary and graduated from Newburg High School in 2002. After graduating from high school, Brock attended Columbia College in Rolla, Missouri and obtained an Associates Degree in Criminal Justice in June 2005. In 2002, Brock began working as a dispatcher with the Rolla Police Department. He worked there until June 2006 at which time he became a police officer with the department. In July 2008, after completing training, Brock became a Missouri State Highway Patrol Trooper. He served the state of Missouri faithfully until October 2014. After leaving the Highway Patrol, Brock began working as a para-professional for the Swedeborg R-3 School District with K-8th grades. He loved his students and made learning fun for them. Brock had obtained Life Rank with the Boy Scouts of America. He was an avid NASCAR fan and loved the Chicago Cubs and the St. Louis Cardinals. He also enjoyed going on family outings, especially family vacations. More than anything, Brock loved his family and his children: Emma, Alexis and Brighton. He would do anything for them and treasured those times spent with them. He also loved spending time and visiting with his sister, Amber. They had a very close relationship. Brock will be sadly missed, but fondly remembered by all those that knew and loved him. He leaves to cherish his memory, his mother: Ellen Brown and husband Stephen of Waynesville, MO; father: Steven Vogt of Belle, MO; three children: Emma, Alexis and Brighton, all of Rolla, MO; one sister: Amber Vogt of Guam; grandfather: Norman Peterson of the state of Michigan; four aunts: Cathy, Ann, Melissa, and Laura; one uncle: Chris; other relatives and a host of friends. Brock was preceded in death by his grandmother: Dorothy Peterson (Feb. 1999); grandfather: Clarence Vogt (Oct. 2015); grandmother: Lillian Gertrude Vogt (2002); and grandfather: Robert Ray Curtis (1984). Services were held at 2:00 p.m. Monday, November 7, 2016 in the Faith Baptist Church of Waynesville, Missouri with Bro. Doug Jacobsen officiating. The song “When I Get Where I’m Going” by Brad Paisley was played. Serving as escorts were Lt. Dusty Hoffman, Lt. Steve Davis, Trooper Jonny Fariole, Trooper Cory Stauffer, Sergeant (Ret) Dewayne Rucker and George Arnold. Burial followed in the Sunset Memorial Estates Cemetery of Waynesville. Services were under the direction of Memorial Chapels and Crematory of Waynesville / St. Robert. Memorial contributions may be made in memory of Brock Vogt to the Brock Vogt Children’s Fund and may be left at the funeral home or at Bank of Iberia, Waynesville.

The family of Brock Andrew Vogt created this Life Tributes page to make it easy to share your memories.