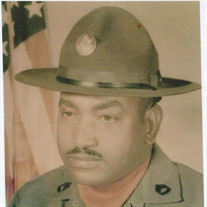 Caleb Joshua Greene, son of the late Clarence Jefferson and Emma Lovie (Green) Greene, was born June 11, 1932 in Ellaville, Georgia. He departed this life on Friday, March 20, 2020 in his home in St. Robert, Missouri having attained the age of eighty-seven years. Caleb grew up and went to school in Schley County, Georgia. He earned his GED and entered the United States Army. In 1951, Caleb entered the United States Army and served his country faithfully until his retirement in 1974. He served as a sergeant for twenty years and received numerous accolades for excellent service, conduct, training, leadership and appreciation. He was a sharpshooter and received medals of honor and service for National Defense as well as for United Nations Service. He had attained the rank of Sergeant First Class. On October 18, 1973, Caleb was united in marriage to Dora Beverly Cunningham in Waynesville, Missouri. They shared 38 years of marriage together and many wonderful memories. After retiring from the military, Caleb began attending Vocational School and learned a trade – carpentry. He received his certification and went on to build his home from the ground up alongside his sons. He also volunteered to assist in the community by providing repair and carpentry services. Caleb went on to work for the Fort Leonard Wood General Hospital in Property Services for approximately 15 years before officially retiring. He became a part of the Fort Leonard Wood Retiree Community. He was known for his deep booming voice and his incredibly kind heart. He loved carpentry and building furniture and he was a wiz at math. He loved world maps and discussing foreign travel. His favorite sport was baseball and he was the St. Louis Cardinals number one fan. He had always dreamed of playing professional baseball and becoming a preacher. He loved watching old movies, westerns, sitcoms and tennis. He enjoyed crossword puzzles and anything that would challenge his mind. In fact, he was so well-versed in many subjects that for having never gone to college, one would think he held a PhD. He enjoyed playing pinochle with his buddies and listening to Jazz and Blues. He loved Georgia peanuts, pecan pie, and black walnut ice cream. He absolutely loved his hat collection – which was his signature, to top off his classic style. Caleb will be sadly missed, but fondly remembered by all those that knew and loved him. He leaves to cherish his memory, seven children: Beverly Greene of Arlington, VA, Vannessa Arnett (Devodie) of Charlotte, NC, Van Cunningham III (Faith) of Carson, CA, Sherry Moore (Willie) of Waynesville, MO, Shanlanda Hill of St. Robert, MO, Clifton Cunningham of St. Robert, MO and Stephanie Holt of Rock Hill, MO; several grandchildren, great grandchildren, and great-great grandchildren; three great-great-great grandchildren; one sister: Cassie Floyd (Homer) of Americus, GA. Also surviving is Monica Aldridge of Ellaville, GA, several nieces, nephews, other relatives and friends. In addition to his parents, Caleb was preceded in death by his wife, Dora Greene; four siblings: Alvin Green, John Henry Greene, Barbara Hunt and Christine Harvey; two daughters: Christine Aldridge and Carolyn Cunningham; two grandchildren; Caleb L. Cunningham and Shenita L. Moore. Even though he is gone from our sight, his memory will live on in our hearts forever. Private family graveside services were held at 1:00 p.m. Wednesday, March 25, 2020 in the Missouri Veterans Cemetery of Waynesville, Missouri with Pastor Danny Graves officiating. Serving as escorts were family and friends. Services were under the direction of Memorial Chapels and Crematory of Waynesville / St. Robert. Memorial contributions may be made in memory of SFC (Ret) Caleb Greene and may be left at Memorial Chapels and Crematory of Waynesville / St. Robert.

Caleb Joshua Greene, son of the late Clarence Jefferson and Emma Lovie (Green) Greene, was born June 11, 1932 in Ellaville, Georgia. He departed this life on Friday, March 20, 2020 in his home in St. Robert, Missouri having attained the age... View Obituary & Service Information

The family of SFC (Ret) Caleb Joshua Greene created this Life Tributes page to make it easy to share your memories.