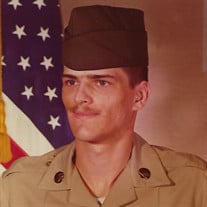 Carl Lee Dawson, son of the late Frederick Milford Dawson and Viola Mae (Jennings) Dawson, was born January 1, 1960 in Peoria, Illinois where he grew up and attended school. As a young man, Carl entered the United States Army and served his country faithfully until his honorable discharge after nine years of service. For his faithful service, he had attained the rank of Sergeant and earned several awards and commendations; some of which include: Army Achievement Medal, Army Good Conduct Medal, Army Service Ribbon, Overseas Service Ribbon, NCO Professional Development Ribbon (1), Driver and Mechanic Badge with Driver-W, Expert Badge (M-16), and the Sharpshooter Badge (Hand Grenade). Carl was very good at working on vehicles and was a Master Ford Technician. In his spare time, he enjoyed working on his truck and building in his woodworking shop. On July 6, 2014, Carl was united in marriage to Cherish Joy Paches in Brimley, Michigan. They shared over six years of marriage together and many wonderful memories. The most important thing to Carl was his family. He loved spending time with them whether it was going on an outing or just hanging around the house together. Carl passed away Saturday, April 3, 2021 in his home having attained the age of 61 years. He will be sadly missed, but fondly remembered by all those that knew and loved him. Carl leaves to cherish his memory, his wife: Cherish Dawson of the home; five children: Robert “Bobby” Vicary, and Angela, David, Jacob, and Sarah Dawson, all of the home; father and mother-in-law: Nonie and Rogelia Paches of Iloilo, Philippines; one sister: Karen of the state of Illinois; three brothers-in-law; two sisters-in-law; several other relatives and friends. In addition to his parents, Carl was preceded in death by one sister: Barbara. Funeral services were held at 1:00 p.m. Wednesday, April 7, 2021 in the Memorial Chapels and Crematory of Waynesville / St. Robert. Burial with military honors followed in the Missouri Veterans Cemetery of Waynesville. Memorial contributions may be made in memory of Carl Dawson and may be left at Memorial Chapels and Crematory of Waynesville / St. Robert.

The family of Carl Lee Dawson created this Life Tributes page to make it easy to share your memories.