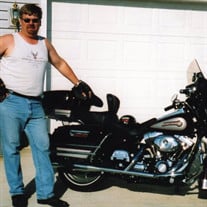 Carl “Kevin” Drake, son of Carl “Nelson” Drake and the late Estelle “Louise” (Obermeier) Drake was born June 21, 1963 in St. Joseph, Missouri. Kevin went home to be with his Lord surrounded by his loving family on the morning of Wednesday, July 30, 2014 at his home in Stoutland, Missouri, at the age of 51 years, 1 month and 9 days. Kevin went to High school at Wentworth Military Academy. Education was very important to him and he went on to earn an Associate’s degree in business at State Fair Community College in Sedalia, Missouri. Kevin was a loyal and dedicated employee of Mid-Am Building Supply in Moberly, Missouri for over 25 years. On March 9, 2002, Kevin was united in marriage to his love, Kathy Lynn Kubinski in the Faith Lutheran Church of St. Robert, Missouri. Though their time together was short, they lived life to the fullest, sharing lots of love, joy, and laughter along the way. Kevin was baptized as an infant, and was a member of the Faith Evangelical Lutheran Church since 2001. In his spare time, Kevin enjoyed riding his motorcycle. Kevin enjoyed cooking for his family and loved having family parties at their home. Those were his most treasured times spent. Kevin leaves to cherish his memory his loving wife, Kathy Drake; two step-children: Justin and Kristy Jennings all of the home; father, Carl “Nelson” Drake of Brookfield, MO; two sisters: Barbara Louise (Terry) Holt of Marceline, MO; Nancy “Annette” (Chris) Poole of Spokane, WA; one brother: Joseph “Paul” (Michelle) Drake of Bucklin, MO; many nieces, nephews, great nieces and great nephews, other relatives and friends. Kevin was preceded in death by his mother and maternal and paternal grandparents. Kevin touched the lives of many and will be sadly missed by all those who knew and loved him. Funeral services were held at 11:00 a.m., Saturday, August 2, 2014 in Faith Lutheran Evangelical Church of St. Robert, Missouri with Pastor Richard Andregg officiating. Speaker, Gordon Thomas shared touching memories at Kevin’s visitation on Friday evening. The songs “I Know That My Redeemer Lives” and “I’m But a Stranger Here” were played by organists, Mary Jones and Karen Boorom. Serving as escorts were Patrick Mills, Michael Jones, Kirk Kudrna, Keith Kubinski, Justin Jennings and Christopher Myers. Burial followed in the Oaklawn Cemetery of Richland, Missouri. Services were under the direction of Memorial Chapel of Richland.

The family of Carl "Kevin" Drake created this Life Tributes page to make it easy to share your memories.