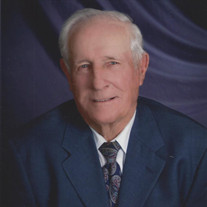 Carl Loran Johnson, son of Carl Louis and Gladys Mae Keeth Johnson was born on the family farm near Swedeborg, Missouri on January 6, 1929 and departed this life at his home in Richland on December 12, 2020. Carl professed his faith in Christ and became a member of the First Baptist Church of Richland in 1965, where he continued to worship throughout the remainder of his life. Carl married the love of his life, Audra Jean Thornsberry, on June 7, 1954. They enjoyed over 66 years of marriage. One of the highlights was the celebration of their 50th wedding anniversary at the First Baptist Church in Richland, hosted by their family and friends. Carl was known for his strong work ethic. In 1954, Carl and his brother, Robert, started a trucking company which became well known throughout the region as Johnson Brother's. Carl enjoyed the trucking industry and worked tirelessly hauling livestock for his friends and family. While trucking, the brothers decided to expand their business to include farming. Carl and Robert continued to run the businesses together until Robert developed health problems in 1987. Shortly thereafter, they sold the trucks and Carl turned his focus solely to farming which he absolutely loved. Carl could spend hours watching his cattle graze in the fields. In recent years, Carl has enjoyed having his nephew, Jerry Lynn Downing, and son Noah, help him with the farming business. Carl will always be remembered as willing to lend a helping hand to his family and friends. He was loved and respected by all who knew him. Carl was most importantly, a loving, kind, supportive husband who cherished every minute he spent with his equally supportive wife. Carl is survived by his wife, Audra, of the home; four sisters-in-law’s: Norma Jean Johnson of Richland, Missouri, Marsha Smith and her husband, Chuck, of Waynesville, Missouri; Cheri Warner of Richland, Missouri, and Bronda Thornsberry of Columbia, Missouri; one brother in-law: Dr. Jerry Thornsberry and his wife, Linda, of Kansas City, Missouri; eight nephews: Gerald Robert Johnson of Richland, Missouri; Jerry Lynn Downing and his wife, Laura, of Richland, Missouri, Brad Thornsberry and his wife, Jamie, of Columbia, Missouri; Doug Thornsberry of Springfield, Missouri; Jay Thornsberry of Omaha, Nebraska, Brad Smith of Richland, Missouri; Kevin Miller and his wife, Lisa, of Clinton, Missouri, and Randy Miller and his wife, Tammy, of Appleton City, Missouri; three nieces, Kim Stepp and her husband, Mark, of Advance, Missouri; Karen Meeks of Springfield, Missouri; Heather Woodring and her husband, Michael, of Ozark, Missouri; other relatives and a host of many friends. Carl was preceded in death by his parents: brother, Robert; mother and father-in-law: Hue and Phyllis Thornsberry; one sister-in-law: Shirley Miller, and her husband, Roy “Byron” Miller; two brothers-in-law: Terry Thornsberry and Robert Warner. Services were held at 12:00 Noon, Friday, December 18, 2020, in the First Baptist Church of Richland with Pastor’s Matt Brady and Bob Lilly officiating. A poem called; The Reunion Heart was read by Linda Thornsberry. Pianist, Marleen Brown played “Amazing Grace.” Serving as escorts were Tom Murray, Dennis Shelton, Tracy and Jacob Davenport, Kenny Parker, and Jim Mitchell. Honorary escorts included Bob Williams, Gary Brown, Weldon Evans, Al Fitzwater, Charlie Davis, Charlie Parker, and Tim Hardesty. Burial followed in the Oaklawn Cemetery of Richland. Services were under the care and direction of Memorial Chapel of Richland. Memorial contributions may be made in memory of Carl Johnson to St. Jude Children’s Research Hospital or the First Baptist Church Scholarship Fund, and may be left at the funeral home. Online condolences can be sent at www.memorialchapelsandcrematory.com

Carl Loran Johnson, son of Carl Louis and Gladys Mae Keeth Johnson was born on the family farm near Swedeborg, Missouri on January 6, 1929 and departed this life at his home in Richland on December 12, 2020. Carl professed his faith in Christ... View Obituary & Service Information

The family of Carl Loran Johnson created this Life Tributes page to make it easy to share your memories.