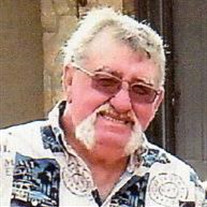 Carl Alvin Posten, born July 25 1947 to Ralph and Velma Posten, died July 21, 2016, just four days short of his 69th birthday. Those who live to mourn his passing include his wife Sharon K. Posten, and cherished brother-in-law Rick Bates, both of the home: Three children: Pamela G. Posten of Grand Forks, ND, Blake R. Posten of Buxton, ND, and Carla J. Posten of St. Robert, Missouri; four siblings: Eddie Posten (Melinda) of Lebanon, Mo, Cora Hake (Todd) of Blue Springs, Mo, Don Posten (Timothy) of Manzanita, Oregon, and David Posten (Joanie) of Lebanon, Mo: 6 grandchildren: Tozh, Travis, Tiara, Chris, Jace and Alejandro; several great-grandchildren, nieces, nephews, other relatives and friends. He was preceded in death by his parents and one infant son: Ted D. Posten. Earlier in his life Carl worked as a carpenter, and after surviving a massive heart attack at an early age, he continued to fashion his life following his own unique path. He was self- reliant, building his own homes. But he loved cars. Looking for them, tinkering with them, finding buyers. He delighted in finding all sorts of treasures in old barns, yard sales, estate sales, and anywhere else something unique might be found. He recycled found objects into structures he built. Throughout the years family and friends found his home a virtual treasure chest of items. He was generous. You needed something, Carl probably had it and was pleased to give it to you. If he didn’t have it, he could get it for you. He enjoyed going to the casinos, admitting that he lost as much as he won, but liking the game anyway. He could be stubborn, difficult to move from a decision once he had made it. Yet, he could also be reflective and express regret at some of the choices he had made. Regardless of all of his various pursuits, Carl just loved being at home, watching TV with Sharon and Rick, or outside, renovating an old bike, or working on some other project. You could remember all these things about Carl and more, and yet, as a wise person has observed, we remember people not necessarily for what they said or did, but also for how they made us feel. And being in Carl’s company felt good. He brought to that encounter the unexpected, often a bit of whimsy, a magical touch. Sometimes just the hint of the outlaw, the thing that your better judgement thought it better not to try, yet you envied him for doing so. And the story of some adventure, whether wholly true, or edited, you knew not, but it was an adventure that you did not have in your own portfolio. Carl was a role model for being oneself, adding color and joy to the great mosaic of life. One great example is this: Many years previous to his death he purchased a new coffin via the internet, had it shipped across the nation to his home in Richland, and stored it carefully in his garage, in readiness for the time it would be of use. That was Carl, capable of doing the unusual, yet, at center, extremely practical. Services were held at 1:00 p.m., Monday, July 25, 2016 in the Memorial Chapel of Richland with Pastor Matthew Posten officiating. Recorded music selections included, "Go Rest High on that Mountain," "Angels Among Us" and "How Great Thou Art." Carl's family and friends shared some fond memories about him and also a special poem was read. Serving as escorts were Tozh Smith, Larry Baronowski, Kenny York, Jamie Posten, Nathan Posten, Jeff Hake and Jace Posten. Honorary escorts included Rickey Bates, Bill Webster, Buck Hooker and Delmar Steward. Burial followed in the Hazelgreen Cemetery, Hazelgreen, Missouri. Services were und the direction of Memorial Chapel of Richland. Memorial contributions may be made in memory of Carl Alvin Posten and may be left at the Memorial Chapel of Richland.

The family of Carl Alvin Posten created this Life Tributes page to make it easy to share your memories.