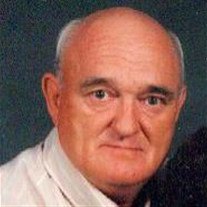 Carlis Wayne McClain was born August 7, 1937 in Judsonia, Arkansas to Dewell and Naomi (Pasley) McClain and passed away Monday, March 16, 2015 in the Life Care Center of Waynesville, Missouri at the age of 77 years. He grew up on Y Highway, living with his grandpa Elmer Pasley and attended Waynesville schools. Carlis made a profession of faith at the Gospel Ridge Union Church and was baptized in the Big Piney River. On April 4, 1958, Carlis was united in marriage to Betty Jean Routh in the First Baptist Church of Waynesville. They shared 56 years together and were blessed with a son, Jeffrey Wayne. Carlis had several jobs before deciding to go into business for himself, when he went to Springfield, bought cleaning equipment and started McClain’s Carpet & Upholstery Cleaning which he operated for 28 years. He worked all over Pulaski County and formed many friendships along the way. When CB radios were popular, his handle was “Mr. Clean” and he kept his yard, equipment, truck and cars immaculate. His favorite hobby was fishing summer and winter, bowling, watching Western movies and reruns of Andy Griffith, and listening to country and gospel music. His greatest enjoyment was spending time with his grandkids Ryan and Carly while they were growing up. Carlis leaves to cherish his memory, his wife, Betty of the home; one son: Jeffrey McClain and wife Becky of Waynesville, MO; two grandchildren: Ryan and Carly McClain; two brothers: Clenis McClain and wife Gloria of Liberty Hill, TX and Wayne Reese and wife Karen of Dixon, MO; four sisters: Thelma Steinbauer, Darlene Vineyard and husband Lonnie and Debra Barber and husband Chuck, all of Dixon, MO and Penny Whitt and husband James of Palmyra, MI; several nieces, nephews, other relatives and friends. Carlis was preceded in death by his father, mother, sister Adriene, brothers Ralph, Reese, Douglas and Bobby Dake. Funeral services were held at 11:00 a.m. Friday, March 20, 2015 in the Memorial Chapels and Crematory of Waynesville / St. Robert with Pastor Danny Graves officiating. Family friend, Pastor David Hokanson read the obituary and recalled his wonderful memories of Carlis. Carlis’ granddaughter, Carly McClain played the songs “It Is Well With My Soul”, “Amazing Grace” and “Tis So Sweet to Trust in Jesus”. The song “Go Rest High on that Mountain” was played. Serving as escorts were Earl Arnold, Wendell Wilson, Charles Hill, Steve Wilkinson, Kenny Foster and Chuck Thompson. Serving as honorary escorts were Jim Arnold, Lee Hickey and Tom Barnes. Burial followed in the Sunset Memorial Estates Cemetery of Waynesville. Memorial contributions may be made in memory of Carlis McClain to the Parkinson’s Foundation or the Pulaski County Baptist Camp and may be left at the funeral home.

Carlis Wayne McClain was born August 7, 1937 in Judsonia, Arkansas to Dewell and Naomi (Pasley) McClain and passed away Monday, March 16, 2015 in the Life Care Center of Waynesville, Missouri at the age of 77 years. He grew up on Y Highway,... View Obituary & Service Information

The family of Carlis Wayne McClain created this Life Tributes page to make it easy to share your memories.