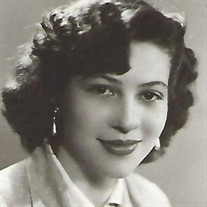 Carmela Francesca Alexander-Zimmer, daughter of the late Antonio Paratore and Carmela (Tirelli) Paratore, was born October 4, 1935 in Messina, Sicily. At the age of three Carmela's family moved to Ethiopia, Africa to join Carmela’s father who had been stationed there in the Italian Army, this is where Carmela grew up. While in Ethiopia, Carmela met a young man by the name of James A. Alexander who was working with the U.S. ARMY. He would see her pass by the military base gate every morning as she walked to Mass. James asked a civilian friend to introduce him to Carmela, they dated and were united in marriage on October 31, 1954. Carmela and James were blessed with six children. The family returned to the States and were stationed at Fort Leonard Wood in 1961. They stayed in the Fort Leonard Wood area until June of 1980 when they moved to Springfield, Missouri. Sadly, Carmela and James divorced, and she met a man by the name of Dieter Zimmer. They were united in marriage and shared several years together before he preceded her in death on April 26, 2009. Carmela was diagnosed with Alzheimer’s in 2009. Her health declined to the point that in 2012, she moved into The Arbor in Cuba, Missouri and the last three years she has been a resident in the Life Care Center of Waynesville. In her younger years, Carmela enjoyed cooking, painting, knitting, crocheting, quilting, and flower arranging. She was a very talented cosmetologist who enjoyed hosting parties and luncheons. She was a past member of the St. Robert Bellarmine Catholic Church and was a member of the Altar and Rosary Society in the church. Carmela passed away Friday, November 27, 2020 in the Life Care Center of Waynesville having attained the age of 85 years. She will be sadly missed, but fondly remembered by all those that knew and loved her. She leaves to cherish her memory, five children: Michael Alexander (Cheryl) of Springfield, MO, Theresa Alexander-Cook (Ralph) of St. Robert, MO, David Alexander (Wendy) of Weldon Springs, MO, Darin Alexander (Susan) of Weldon Springs, MO and Steven Alexander of Fordland, MO; one brother: Albino Paratore of Turino, Italy; seven grandchildren; Lesley, Lauren, Andy, Courtney, Sarah, Breanna and Danielle; seven great grandchildren; nieces, nephews, other relatives, and friends. In addition to her parents and second husband, Carmela was preceded in death by her first husband: James Alexander; one son: Antonio Alexander; and one brother: Nino Paratore. Even though she is gone from our sight, the memory of her adventurous and loving spirit will live on in our hearts forever. Graveside services were held at 11:00 a.m. Thursday, December 3, 2020 in the Resurrection Cemetery of St. Robert, Missouri with Father John Groner officiating. Services were under the direction of Memorial Chapels and Crematory of Waynesville / St. Robert. Memorial contributions may be made in memory of Carmela Alexander-Zimmer and may be left at Memorial Chapels and Crematory of Waynesville / St. Robert.

The family of Carmela Francesca Alexander-Zimmer created this Life Tributes page to make it easy to share your memories.