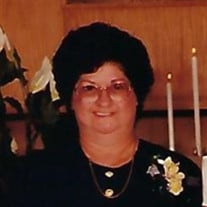 Carole Lorene King, daughter of the late Roscoe Fahnestock and Goldie (Bybee) Fahnestock, was born February 25, 1942 in Fristoe, Missouri where she grew up. She attended school at Skyline in Urbana, Missouri. On December 2, 1960, Carole was united in marriage to Leonard Dwayne King in Springfield, Missouri. They shared over 59 years of marriage together and four children: Rodney, Jeff, Peggy, and Terrie. She was a very loving and loyal wife to Leonard. Carole was a hardworking woman and took great pride in helping to provide and care for her family. She worked for the Waynesville R-VI School District as a cook for 17 years before retiring. In her spare time, Carole enjoyed spending time at the Lake of the Ozarks any time that she could and was an avid reader. You could find her outdoors most of the time working in her flower gardens and with her plants. Most importantly, she loved spending time with her family, especially the grandchildren, and enjoyed cooking for their get-togethers. She also enjoyed going on trips with her family. Carole had made a profession of faith and attended Idumea Baptist Church. She enjoyed her church family and was willing to help wherever she could, especially in the kitchen. Carole went home to be with her Lord on Saturday, November 21, 2020 in the Mercy Hospital of Springfield, Missouri having attained the age of 78 years, 8 months, and 24 days. She will be sadly missed, but fondly remembered by all those that knew and loved her. Carole leaves to cherish her memory, her husband of almost 60 years: Leonard King of the home; two sons: Rodney King (Lori) of Independence, MO and Jeff King (Nancy) of Springfield, MO; two daughters: Peggy King of Pinellas Park, FL, and Terrie Brooks (Ronnie) of Odessa, MO; eight grandchildren; nine great grandchildren; one sister: Freeda DeLuca of Independence, MO; one brother: Bernie Fahnestock of Independence, MO; several nieces, nephews, other relatives and friends. In addition to her parents, Carole was preceded in death by one brother: Aubrey; and one sister: Barbara. Funeral services were held at 1:00 p.m. Monday, November 30, 2020 in the Memorial Chapels and Crematory of Waynesville / St. Robert with Pastor Matt Mallonee. The recorded songs “In the Garden” and “I Am Home” by Carole’s grandson, Joe Brooks, were played. Serving as escorts were David DeLuca, Dan DeLuca, Jonathan DeLuca, Brody Helton, Bronson Helton, and Andrew O’Malley. Burial followed in the Waynesville Memorial Park Cemetery of Waynesville. Memorial contributions may be made in memory of Carole King and may be left at Memorial Chapels and Crematory of Waynesville / St. Robert.

Carole Lorene King, daughter of the late Roscoe Fahnestock and Goldie (Bybee) Fahnestock, was born February 25, 1942 in Fristoe, Missouri where she grew up. She attended school at Skyline in Urbana, Missouri. On December 2, 1960, Carole... View Obituary & Service Information

The family of Carole Lorene King created this Life Tributes page to make it easy to share your memories.

Carole Lorene King, daughter of the late Roscoe Fahnestock and...