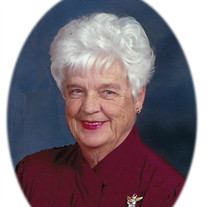 Carolea Yvonne Hayes, daughter of the late William Nelson and Mary (Bird) Pritchard, was born July 7, 1931 in Maysville, Missouri. She went home to be with her Lord the morning of December 25, 2018 in the Rosewood Manor of Rolla, Missouri having attained the age of eighty-seven years. Carolea grew up in Fairport until she began high school and then graduated from Maysville High School. She later furthered her education with a Bachelor of Science Degree and a Master’s Degree in Elementary Education from Northwest Missouri State University. On June 20, 1954, Carolea was united in marriage to Phillip Holbrook Hayes at Union Star, Missouri. They shared over sixty-four years of marriage together and two children: Stewart and Traci. Carolea worked as a real estate agent/broker for Apple Realty in Maryville for thirteen years. She was a member of the “Million Dollar Club” in real estate which was quite an honor in the mid 1980’s. While in Maryville, Carolea began teaching school, primarily kindergarten. She served there for twenty-three years before moving to the Waynesville area. After moving to the Waynesville area, she began teaching at Swebeborg Elementary where she taught remedial math for ten years. She also worked for twenty years at the family business, The Station Tanning Salon in St. Robert. Carolea was a member of the First Christian Church of Waynesville for many years. She enjoyed helping wherever she was needed and was known, just not at church, but in the county for her awesome chocolate cake and her potato soup. Carolea also enjoyed being a member of the local bridge club and enjoyed playing cards and visiting with all the members. Carolea leaves to cherish her memory, her husband: Dr. Phil Hayes of the home; two children: Stewart Hayes (Elaine) of Wichita, KS and Traci Hayes of St. Robert, MO; one step-granddaughter: Erin Anderson of Wichita, KS; adopted daughters: Angela Pearson, Barb Nelson and Cheryl Nowack; special friend: Kathy Kutscher; several nieces, nephews, other relatives and friends. In addition to her parents, Carolea was preceded in death by one brother: Keith Pritchard; and one sister: Wilma Boone. Even though she is gone from our sight, her memory will live on in our hearts forever. Services were held at 11:00 a.m. Friday, December 28, 2018 in the Memorial Chapels and Crematory of Waynesville / St. Robert with Pastor Roy Gilkey and Pastor Danny Graves officiating. Carolea’s nephew, Keith Pritchard recalled his wonderful memories of Carolea. Soloist Becky Lercher sang “Amazing Grace”, “It Is Well With My Soul” and “Celebrate Me Home”. Serving as escorts were Keith Pritchard, Kevin Pritchard, David Nichols, Tim Berrier, Jerry Nelson and Jerry Zander. Serving as honorary escorts were Roy Nichols, Ron Seymore, Gary Wann and Carl Boone. Burial followed in the Missouri Veterans Cemetery of Waynesville. Memorial contributions may be made in memory of Carolea Hayes to the First Christian Church of Waynesville and may be left at the funeral home.

Carolea Yvonne Hayes, daughter of the late William Nelson and Mary (Bird) Pritchard, was born July 7, 1931 in Maysville, Missouri. She went home to be with her Lord the morning of December 25, 2018 in the Rosewood Manor of Rolla, Missouri having... View Obituary & Service Information

The family of Carolea Yvonne Hayes created this Life Tributes page to make it easy to share your memories.

Carolea Yvonne Hayes, daughter of the late William Nelson and...