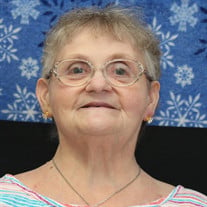 Carolyn Ann Henson, daughter of Arthur Russell and Betty June (Stevenson) Morton in the old Wallace Hospital, Lebanon, Missouri on July 21, 1957. In August of 1958, her family left Richland, Missouri and moved to Lewisville, Texas where she grew up and attended school graduating from LHS in 1976. In 1982, she came back to Crocker, Missouri, living on a farm for about three years, raising chickens, calves, and turkeys. She met the love of her life, Clifford Lee “Buster” Henson and the two were married June 28, 1986, in Crocker, Missouri. They moved to Richland where together they shared over twenty-eight years together before his passing November 7, 2014. She was a loving and devoted wife; and enjoyed taking care of her home, cats, Cockatiel birds, and spending time outside watering the flowers, yard, and mowing grass in her younger days. Carolyn also liked to crochet, listen to Christian radio and gospel music. She herself enjoyed singing. Carolyn was a member of the New Testament Baptist Church. She trusted in Jesus Christ as her personal Savior in 1987, while at her home. She was baptized October 11, 1987 at Maranatha Baptist Church in St. Robert, Missouri, and also had attended First Baptist Church and House of Prayer both in Richland. Carolyn worked at a window factory for five years, she took care of the elderly, and cared for handicapped children, and also worked in a meat market during her life until becoming disabled in 2003. She struggled with health issues for years and tried to not let it get her down. Carolyn relied heavily on her Lord’s strength and grace as each new day began. On the afternoon of Thursday, March 4, 2021, Carolyn left the struggles of this life behind and was escorted home to heaven to be with the Lord she loved having attained the age of sixty-three while in the Richland Care Center. She deeply appreciated the care she received from the staff there. She is preceded in death by her father, Arthur, mother, Betty & stepfather, John Cathey, and beloved husband, Buster, and great aunt, Mildred Burnett. Carolyn leaves behind one uncle, Freddie Morton (Donna) of Crocker, MO, two stepdaughters, Mary Shelton (Rick) of Kansas City, MO, and Penny Fry (Rick) of St. Robert, MO, aunts, uncles, cousins, and a host of other relatives, and friends. Her kind heart, warm smile, and loving spirit will be missed. Funeral services were held at 2:00 p.m., Friday, March 12, 2021, in the Memorial Chapel of Richland, Missouri with Brother Josh Wood officiating. Favorite music selections included, “Amazing Grace,” “Celebrate Me Home,” and “What a Day That Will Be” were played. Friends served as escorts. Burial followed in the Oaklawn Cemetery of Richland. Services were under the Memorial Chapel of Richland. Memorial contributions may be made in memory of Carolyn Ann (Morton) Henson to the donor’s choice and may be left at the funeral home. Online condolences can be sent at www.memorialchapelsandcrematory.com.

Carolyn Ann Henson, daughter of Arthur Russell and Betty June (Stevenson) Morton in the old Wallace Hospital, Lebanon, Missouri on July 21, 1957. In August of 1958, her family left Richland, Missouri and moved to Lewisville, Texas where she... View Obituary & Service Information

The family of Carolyn Ann (Morton) Henson created this Life Tributes page to make it easy to share your memories.