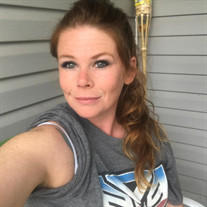 Cayenne Marie Berens, daughter of Raymond Edward Starr and Deborah Marie (Caldwell) Spurlock, was born July 3, 1985 in Osage Beach, Missouri. As a young girl, Cayenne grew up in the Kansas City area and graduated from Raymore High School with the Class of 2004. She came back to the Pulaski County area and was united in marriage to Sean Michael Berens on June 22, 2008 in St. Robert, Missouri. They shared over 13 years of marriage together and were blessed with one son: Lincoln Berens. Shortly after Cayenne and Sean were married, they moved to Tennessee for a time where she attended college and studied Phlebotomy. Cayenne worked for a time as a restaurant manager, but her greatest joy came from being Lincolns’ mom. She loved him dearly and enjoyed watching him grow up. In her spare time, she loved to be outdoors either fishing, riding motorcycles, go-carts, or if there was something she hadn’t tried, she wanted to do it. She enjoyed music and going to concerts. Cayenne passed away Friday, June 3, 2022, in Springfield, Missouri having attained the age of 36 years. She will be sadly missed, but fondly remembered by all those that knew and loved her. She leaves to cherish her memory, her husband, Sean Berens of Waynesville, MO; her son, Lincoln Berens; her mother and father, Deborah and Curtis Spurlock of Waynesville, MO; two sisters, Reba Bales (Jonathan) of Waynesville, MO, and Kira Trahan of the state of Texas; four brothers, Harley Spurlock of Waynesville, MO, Kain Spurlock (Jennifer) of the state of Texas; John Starr of St. Louis, MO, and Sammy Starr of Harrison, AR; her maternal grandmother, Penny Caldwell of Laquey, MO; her father-in-law and mother-in-law, Thomas Berens and Melesa Snyder, both of Dixon, MO; brother-in-law, Thomas Christopher Berens (Rebecka) of Valdosta, GA; grandmother, Bettie Shepherd of Dixon, MO; a number of nieces and nephews; as well as a host of other relatives and friends. Even though she is gone from our sight, her carefree and adventurous spirit will live on in our hearts forever. Funeral Services will be held at 2 p.m. Saturday, June 11, 2022, in Memorial Chapels and Crematory of Waynesville/St. Robert. Visitation will be Saturday, from 12 Noon until service time at 2 p.m. in the funeral home. Memorial contributions in memory of Cayenne Berens may be made and may be left at the funeral home.

The family of Cayenne Marie Berens created this Life Tributes page to make it easy to share your memories.