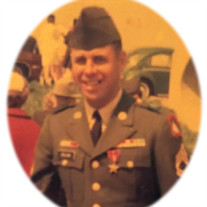 Cecil Bradley Collins, son of the late George Edgard Collins and Mollie (Green) Collins, was born August 6, 1935 in War Creek, Kentucky. As a young boy, Cecil grew up in a small town in Ohio where he attended school. In August of 1952, Cecil entered the United States Army. The branch of service was determined by a coin flip between he and his best friends. Cecil called heads which won and took them to the Army while a tails would have had both of them enlisting in the Navy. Cecil served his country faithfully until his retirement in October 1972. During his 20 years of service, he held every position in the Engineer Corps from Demolition Specialist to First Sergeant. He operated all types of heavy equipment from tow motors to bulldozers, read blueprints, and kept all types of military records. For his faithful services, he earned several awards and commendations; some of which include: Vietnam Service Medal w/3 Bronze Service Stars, Bronze Star Medal w/2nd Oak Leaf Cluster, Overseas Bars (2), Army Commendation Medal, Good Conduct Medal – 5th Award, and Driver Identification Badge. At the time of his retirement in 1972, Cecil was stationed at Fort Leonard Wood, Missouri. After retiring from the military, Cecil decided to stay in the Ft. Leonard Wood area and became the owner and operator of the TeePee Lounge, a nightclub located in St. Robert, Missouri. He was the owner from January 1972 until April 1974, at which time he became the owner and operator of Collins Uregas & Appliance Company located in Waynesville, Missouri. He was there until June 1975 and at which time he moved to Ohio. On November 24, 1975, Cecil became employed with the Ohio Reformatory for Women where he was Acting Sergeant and was responsible for supervision of correctional staff and security of this women’s reformatory corrections facility that housed 600 inmates. He served in that position for 10 years before moving back to the Dixon, Missouri area where he remained until 2014 when his health began to fail at which time he moved to La Jolla, California to be closer to his son David. Cecil was blessed with two sons: David and Douglas and he was proud of each one of them and their families. In his spare time, Cecil enjoyed going to yard sales where he collected various “finds” which he would then take to his son’s home in North Carolina to deposit the “treasures” with his son and granddaughter before returning home to Missouri to restock. He was a collector of many things and enjoyed showing off his finds. He was a member of the VFW. His later years were focused on his sons and grandchildren, and great grandchildren. And became some of the most enriched of his life. Cecil passed away Saturday, October 16, 2021 in the Scripps-La Jolla Hospital of San Diego, California having attained the age of 86 years. He will be sadly missed, but fondly remembered by all those that knew and loved him. He leaves to cherish his memory, his two sons: David Collins (Lorraine) of Lakeside, CA and Douglas Collins (Dutchie) of Buckhorn, MO; five grandchildren: Taylor Collins, Kelsi Collins, Candace Winkler, Kyle Weeks, and Megan Goodrich; five great grandchildren: Durham Winkler, Cecilia Winkler, Charlea Storie, Kaylee Weeks, and Graysen Gregory; several nieces, nephews, other relatives and friends. In addition to his parents, Cecil was preceded in death by one brother: Eugene Collins. Memorial contributions may be made in memory of SFC (Ret) Cecil Collins and may be left at Memorial Chapels and Crematory of Waynesville / St. Robert.

Cecil Bradley Collins, son of the late George Edgard Collins and Mollie (Green) Collins, was born August 6, 1935 in War Creek, Kentucky. As a young boy, Cecil grew up in a small town in Ohio where he attended school. In August of 1952,... View Obituary & Service Information

The family of SFC (Ret) Cecil Bradley Collins created this Life Tributes page to make it easy to share your memories.