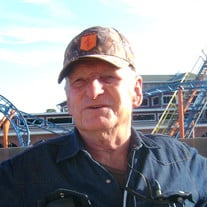 Cecil Wayne Pendleton, Sr., son of the late Horus “Baldy” Pendleton and Florence (Schultz) Pendleton, was born January 20, 1936 in Wellsville, New York. He passed away Tuesday, December 24, 2019 in the Missouri Veterans Home in St. James, Missouri having attained the age of 83 years. As a young boy, Cecil grew up in Belmont, New York where he attended school. At the age of 18, Cecil entered the United States Army and served in Germany and Korea and was honorably discharged. While in the military, Cecil met Doris Ann Stocum and they were united in marriage on March 8, 1957 in Scio, New York. They shared several years of marriage together and were blessed with five children: Roger, Cecil Jr., Mike, Doran, and Barbara. After being discharged from the military, Cecil went back to work at his father’s trucking business. He and Doris bought a farm in Scio where they resided for many years. Cecil continued driving a truck and later went to work for New York State Highway Department and retired in 1996. In February 2009, Cecil moved to Big Piney, Missouri to be closer to his son. Cecil was a workaholic but took great pride in providing for his family. He enjoyed working, especially on mechanical things. He was always tearing apart things, figuring out how they worked and putting them back together. He loved being outdoors, especially after he moved to the Big Piney area. However, home was very important to him and he enjoyed being home with his family. Cecil leaves to cherish his memory, his four children: Doran Pendleton of Big Piney, MO, Mike Pendleton of Sedalia, MO, Roger Pendleton (Linda) of Temple, TX and Barbara Verguson of Ashville, NC; thirteen grandchildren; several great grandchildren; one sister; several nieces, nephews, other relatives and friends. In addition to his parents, Cecil was preceded in death by his wife: Doris Ann Pendleton; one son: Cecil Pendleton, Jr.; four sisters: Punch, Lillian, Barb and Alberta; and one brother: Bob. Graveside services with military honors were held at 2:00 p.m. Tuesday, December 31, 2019 in the Missouri Veterans Cemetery of Waynesville with Chaplain (CPT) Joseph McCall officiating. Military honors were provided by the United States Army of Fort Leonard Wood, Missouri. Services were under the direction of Memorial Chapels and Crematory of Waynesville / St. Robert. Memorial contributions may be made in memory of Cecil Pendleton, Sr. and may be left at Memorial Chapels and Crematory of Waynesville / St. Robert.

The family of Cecil Wayne Pendleton Sr. created this Life Tributes page to make it easy to share your memories.