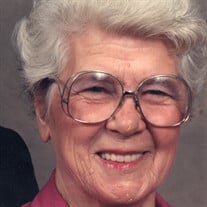 Cecile O. (Williams) Sigler daughter of the late Samuel Hale and Alice Louisa (Taylor) Williams was born in Mitchell, Arkansas on January 9,1916. Cecile grew up in Viola, Arkansas. She walked three miles to attend a rural school in Independence and later attended Valley View. On June 27, 1935 Cecile was married to her one true love, Johnnie Albert Sigler and to this union 3 daughters were born, Glenda, Norma and Johnice. Cecile and John left the day after they were married and moved to McFaden, Arkansas, where Johnnie had a job as a mail carrier. The happy couple lived there for four years before moving to West Plains, Missouri. The little family bought a small farm and moved to Richland, Missouri in 1952, where they remained until they both went home to be with their Lord. Cecile went to work as a cook at the Richland Elementary School and later worked at the Richland Care Center for nearly eighteen years until she retired in 1991. Cecile was saved at an early age and joined the Baptist church and attended Beulah Baptist church for many years. She enjoyed making quilts for her family and gardening. She raised a big garden every year and canned and gave away the produce to family and friends as long as her health permitted. She was also known for her cooking, especially her homemade chicken and noodles, rolls and blackberry cobbler. Cecile was no stranger to hard work and grew up growing cotton in Arkansas and worked beside her husband on their farm. Cecile was preceded in death by her parents, her beloved husband John (April 8, 1998), daughter Glenda Louetta Pool (July 16, 2002), granddaughter, Yvonne Stovall (May 15, 2015), five sisters, Sally and Hester Williams, Hurl Nichols, Alpha Holstine and Alice Orr, five brothers, Herbert, Audra, Bill, Kirby and Neal Williams. Cecile is survived by her two daughters, Norma Lea Baker of Spring, TX and Johnice Persinger of Richland, MO; 6 grandchildren: Ronda Mullis (Greg) of Houston, TX, Janet Holmes (Scott) of Tomball, TX, Melissa Douglas (Steve) of Richland, MO, Bruce Ogle (Susan) of Richland, MO, Tracy Ogle (Jeannette) of Unionville, MO and Cecilia Luna (Travis) of Richland, MO; numerous great grandchildren and great-great grandchildren; one sister: Wilma Smith of Bexar, AR; several nieces, nephews, and other relatives and friends. Services were held at 2:00 p.m, Friday, July 17, 2015 in the Memorial Chapel of Richland with Pastor Christopher Hendrix, Sr. officiating. Soloist, Becky Lercher sang "Without Him" and "There's Room at the Cross." Serving as escorts were Bruce Ogle, Tracy Ogle, Joshua Quesenberry. Travis Luna Jared Stoval, Steve Douglas, Justin Douglas and Wes Douglas. Burial followed in the Oaklawn Cemetery. Services were under the direction of Memorial Chapel of Richland. Online condolences may be made at www.memorialchapelsandcrematory.com

The family of Cecile Sigler created this Life Tributes page to make it easy to share your memories.