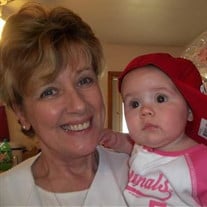 Chandra Collette Kimbro, daughter of the late Rueben Robert and Violet Jean (Sorensen) Smith, was born October 30, 1958 in Woodriver, Illinois. At the age of nine, Chandra and her family moved to Warrenton, Missouri, where she attended and graduated from school. In July of 1976, Chandra married Renard Ellis and over the years they were blessed with three sons: Jarrett, Nolan and Chad. Through several duty station moves, including Georgia, Virginia and Germany, Chandra and her family settled down at Fort Leonard Wood in the summer of 1985. Chandra began nursing school shortly after coming to Fort Leonard Wood and earned her nursing license in 1992. She loved helping people, always with a smile on her face and a tender hand. She worked at several local healthcare facilities, including: Sunset Village of the Ozarks, Pulaski County Home Health Agency, Phelps County Regional Medical Center of Rolla, Life Care Center of Waynesville, and was serving as an Emergency Department LPN at the General Leonard Wood Army Community Hospital when she was diagnosed with late-stage lung cancer in May of 2015. Chandra LOVED being a Nurse. In her 15 years working in the Emergency Department, it wasn’t uncommon for her to host junior Soldiers into her home for holiday meals when they had nowhere else to go. Chandra was one of a kind. On April 29, 2006, Chandra was united in marriage to Thomas “Tom” Goodson Kimbro in St. Louis, Missouri. They shared 10 wonderful years together. Her caring attitude for people carried over in her being very active with serving on the board for Tonya’s Hope, a local charity which she co-founded to help families affected by cancer. In her spare time, Chandra enjoyed being outdoors. You could find her either tending to her flower garden, or sitting outside on the back deck, enjoying the view. She loved to cook, and loved to prepare meals for her family. She also liked to make candles and was an avid St. Louis Cardinals and St. Louis Blues fan. Most importantly, she loved spending time with her family, especially her granddaughter Abigail. Chandra passed away Wednesday, February 3, 2016 in her home, surrounded by family, having attained the age of 57 years. She will be sadly missed, but fondly remembered by all those that knew and loved her. Chandra leaves to cherish her memory, her husband: Thomas Kimbro of the home; three sons: Jarrett Ellis (Lisa) of St. Robert, MO, (MAJ) Nolan Ellis of St. Robert, MO and Chad Ellis of Laquey, MO; three stepdaughters: Jackie Boone (Kevin) of Imperial, MO, Jessica Kimbro of Seattle, WA and Lacy Kimbro of Arnold, MO; one granddaughter: Abigail Ellis; six siblings: Leona Harris of Quinlan, TX, John Smith (Anna) of Paragould, AR, Gloria Butler of Warrenton, MO, Neal Smith (Martha) of Marthasville, MO, Terra Weckherlin (Terry) of Warrenton, MO and Sonia Mans (Larry) of Jonesboro, AR; numerous nieces, nephews, other relatives, friends and her beloved co-workers/Soldiers all over the world. Funeral services were held at 10:30 a.m. Wednesday, February 10, 2016 in the Memorial Chapels and Crematory of Waynesville / St. Robert with Rev. Christopher Hendrix officiating. The songs “Shower the People” by James Taylor, “Birds” by Dan Fogelberg and “Going Down to Cuba” by Jackson Browne were played. Inurnment followed in the Sunset Memorial Estates Cemetery of Waynesville.

Chandra Collette Kimbro, daughter of the late Rueben Robert and Violet Jean (Sorensen) Smith, was born October 30, 1958 in Woodriver, Illinois. At the age of nine, Chandra and her family moved to Warrenton, Missouri, where she attended and... View Obituary & Service Information

The family of Chandra Collette Kimbro created this Life Tributes page to make it easy to share your memories.

Chandra Collette Kimbro, daughter of the late Rueben Robert and...