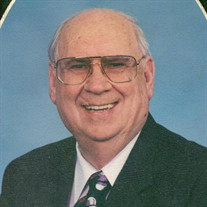 Charles “Art” Arthur Anderson, son of the late William Cleveland Anderson Sr. and Mary Elizabeth (Hill) Anderson, was born February 13, 1924 in Waynesville, Missouri. He went home to be with his Lord Tuesday, April 11, 2017 in the Life Care Center of Waynesville having attained the age of ninety-three years. Art, as he was known by his family and friends, grew up in Waynesville and graduated from Waynesville High School with the Class of 1943. As a kid, Art worked at the Bell Hotel for a time and at the age of 17, started working for Safety Service Station (now the Every Blooming Thing flower shop) and bought the rights to own the business until his dad made him sell it and go back to school. During World War II, Art worked for Pratt & Whitney in Kansas City, Missouri building R29 airplane engines. He came back to Waynesville and went into the vending business with Carl Trippe of St. Louis. Upon Carl’s death, Art bought the business and was the owner and operator of H.A.M. Vending and Anderson Distributing. He was very involved in the business until his health began to fail. In 1943, Art married Pauline Massey and together they had three children, Richard, Rena, and Charles II. On November 10, 1968, Art was united in marriage to Rita Marie Mathis in Springfield, Missouri. They shared over 32 years of marriage together and had one child: Monica. Art was very involved in the Waynesville community and was always looking for ways to make it better. He served on the Waynesville City Council for 30 years and served on the Waynesville R-VI School board for 21 years, even serving as President of the board for a time. In his spare time, Art liked collecting old Cadillacs. Mostly, he enjoyed visiting with the people of the community and could find him making his daily rounds to some of the local businesses, just visiting with the owners. Mr. Anderson is survived by his three children: Monica Fulton (Richard) of Waynesville, MO, Rena Morrison (Kenneth) of Memphis, TN and Charles Anderson II of Sedalia, MO; two brothers: Norman Anderson of Waynesville, MO, and Andrew Anderson (Irene) of Bartlesville, OK; six grandchildren: Crystal Boyer (Bill) of Purdy, MO; Kyle Elseman (Whitney) of St. Robert, MO; Buffie Koehler (Jay) of Algonquin, IL; Jerrod Morrison (Memphis, TN), Charles Anderson III and Jacob Miles Anderson (Summerfield, IL); seven great grandchildren: Hannah Boyer, Wyatt Boyer, Blake Elseman, Myla Miller, Katie Koehler, Allie Koehler, Phillip Strait, Trenton Strait; several nieces, nephews, other relatives and friends. In addition to his parents, Art was preceded in death by his wife, Rita; son, Richard; brother: William Cleveland, Jr.; and granddaughter: Melissa Strait. Funeral services were held at 1:00 p.m. Friday, April 14, 2017 in the Memorial Chapels and Crematory of Waynesville / St. Robert with Pastor Danny Graves and Pastor Richard Breeden officiating. The songs “Amazing Grace”, “Be Not Afraid” and “On Eagle’s Wings” was played. Serving as escorts were Kyle Elseman, Bill Anderson, Paul Corbett, Matthew Hayes, Bill Boyer and Kevin Shrum. Serving as honorary escorts were Bob Knight, Bill Ransdall and Doug Renno. Burial followed in the Waynesville Memorial Park Cemetery. Memorial contributions may be made in memory of Art Anderson to the Waynesville School District Foundation, American Kidney Foundation or the American Diabetes Association and may be left at the funeral home.

Charles &#8220;Art&#8221; Arthur Anderson, son of the late William Cleveland Anderson Sr. and Mary Elizabeth (Hill) Anderson, was born February 13, 1924 in Waynesville, Missouri. He went home to be with his Lord Tuesday, April 11, 2017 in the... View Obituary & Service Information

The family of Charles "Art" Arthur Anderson created this Life Tributes page to make it easy to share your memories.