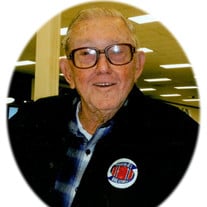 1SGT (Ret.) Charles Loyd Bohannon, the third of four children born to the late Charles W. and Mattie (Minick) Bohannon, was born April 7, 1922 in Plato, Missouri. He graduated from Lebanon High School with the Class of 1941. On February 4, 1943, Charles enlisted in the United States Army. He served in Northern France, Rhineland and Central Europe. He received the American Campaign Medal, European African Middle Eastern Theater Ribbon w/3 Bronze Service Stars, Good Conduct Metal and the World War II Victory Medal. He retired after serving 22 years and had attained the rank of First Sergeant. On July 1, 1950, Charles and Maxine Violet Wickers were married and to this union two children were born, Michael and Aprille. They were married for 43 years before Maxine preceded him in death in 1993. After retiring from the military, he continued to serve his country by working for the United States Air Force in the Civil Engineering Carpenter Shop and retired in 1977. In December 1977, Charles and the family moved back to Pulaski County. In his spare time, Charles enjoyed square dancing and began dancing in 1964. Charles passed away Sunday, August 7, 2016 in the Mercy Hospital of Springfield, Missouri having attained the age of 94 years. Charles leaves to cherish his memory, his companion, Kim Denison, of the home; a son, Michael Bohannon of Greenfield, CA; a daughter, Aprille Manion of Plattsburg, NY; 3 grandchildren, Zachary Bohannon, Rhea Manion, and Danney Manion, Jr.; 2 great-grandchildren, Troy Rivers and Kitana Manion; a sister, Letha Young of the State of Arizona; a number of nieces and nephews; as well as a host of other relatives and friends. In addition to his wife and parents, Charles was preceded in death by two brothers: Everett E. and Claude W. Bohannon; and son-in-law: Danney Manion, Sr.

1SGT (Ret.) Charles Loyd Bohannon, the third of four children born to the late Charles W. and Mattie (Minick) Bohannon, was born April 7, 1922 in Plato, Missouri. He graduated from Lebanon High School with the Class of 1941. On February... View Obituary & Service Information

The family of Charles Loyd Bohannon created this Life Tributes page to make it easy to share your memories.