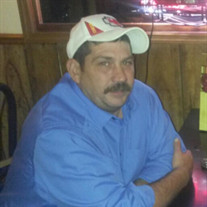 Charles Bryan Caldwell, son of Charles Clifford Caldwell and Carneda Gail (Corns) Caldwell Clevenger, was born February 15, 1968 in Muncie, Indiana. He grew up in Greenup, Kentucky where he attended school. On July 9, 1988, Charles was united in marriage to Rita Sue Williams in Waynesville, Missouri. Charles worked for a time on the river on barges, but was most recently employed at Fort Leonard Wood with EDP. Charles loved being outdoors; whether it was working in his yard, in his flower garden, farming, or just enjoying nature. He also liked to work on his car, which he named Bonnie. He was such a car enthusiast that he was starting a car club. He also enjoyed watching NASCAR races and football. Most importantly, he loved his family and spending time with them when he could. Charles passed away Friday, January 16, 2015 in his home having attained the age of 46 years, 11 months and 1 day. Charles leaves to cherish his memory, his wife: Rita Sue Caldwell of St. Robert, MO; five sons: Bryan Shane Caldwell, Willie Wesley Cody Caldwell, Charles Corey Caldwell, Chad Michael Linkous and Nicholas Wade Caldwell; mother and step-father: Carneda Gail and Larry Joe Clevenger of Kenutcky; two daughters-in-law: Rachel Michelle Bietsch Caldwell and Sunshine Linkous of St. Robert, MO; one grandson: Eathan Parker Caldwell; five siblings: Darrin Dwayne Caldwell, David Wesley Caldwell, Larry Michael Clevenger, Amy Darlene Stephens and Kirsten Hope Clevenger; several nieces, nephews, other relatives and friends. Charles was preceded in death by his father, Charles Clifford Caldwell. Funeral services were held at 6:00 p.m. Wednesday, January 21, 2015 in the Memorial Chapels and Crematory of Waynesville / St. Robert with Dr. Donald Leggett officiating. The songs “Go Rest High on that Mountain” and “When I Get Where I’m Going” were played. In lieu of flowers, the family requests memorial contributions be made in memory of Charles Bryan Caldwell and may be left at the funeral home.

The family of Charles Bryan Caldwell created this Life Tributes page to make it easy to share your memories.