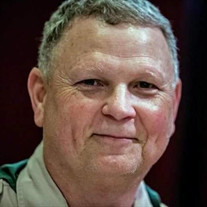 Charlie Cartwright, son of Charles and Maudie (Janise) Cartwright, was born November 9, 1958 in Bay City, Texas. As a young boy he grew up in Leander, Texas and after graduating from high school, he entered the United States Army and served faithfully until his honorable discharge. After being honorably discharged, Charlie worked for a concrete laboratory testing company in Texas. He later worked for Commercial Construction companies, working as an Area Superintendent. In 2012, he began working at Missouri Science and Technology in Rolla, Missouri until his passing. On April 11, 1999, Charlie was united in marriage to Alisha Jane Wilson. They shared over 19 years of marriage together and three children: Kailey, Sean and Zachary. His family came first. His children made him happy (even through some of the tough years, like the “terrible twos”, anxiety-ridden adolescence, terrifying teenage years…). Charlie always put his children’s needs ahead of his own and took great pride in them. He loved watching his daughter Kailey grow into a beautiful, intelligent young lady that brought him so much joy. His oldest son, Sean, reminded him so much of himself as a young man. Many times, he would share how proud he was of him and still is. Zachary, the youngest, shared Charlie’s passion for learning. Many times Charlie would be in awe of how quickly Zach would learn a new skill and how generous he would be when it came to his oldest brother, Sean. His expectation for his kids has always been to do their best. Charlie genuinely loved his community and was very involved. He was a member of the St. Robert Bellarmine Catholic Church and served as Eucharistic Minister and previously held a position on the Parish Council. He loved his church community especially if it involved the youth of the parish. He was also a member of the Knights of the Columbus and the Boy Scouts of America. In the Boy Scouts, he stood for “the scout”, many times advocating for the youth versus adults. He made lifelong friends in the program and due to illness, missed several monumental events, but his heart was with the children. Charlie worked hard, and his spare time was limited, but during those times when he could slow down, he enjoyed NASCAR racing. But the things he enjoyed most during his quiet times, was being able to embrace his wife and spend time with his children. Charlie was a relatively quiet individual with a gentle soul that loved and appreciated many people. Most often he spoke only when he needed to and spent the rest of his time listening. There were times at work that he made people laugh and when he decided to share a story, it was worth the attention of his audience. From the people at his office to the families in our community, they touched his life just as much as he touched theirs. There are many people he appreciated: Johnna, David, Patrick, Duane, Mark, Connie, Dan, and so many others. Charlie went home to be with his Lord Tuesday, April 17, 2018 in the Barnes Jewish Hospital of St. Louis, Missouri having attained the age of 59 years. He will be sadly missed, but fondly remembered by all those that knew and loved him. Charlie leaves to cherish his memory, his loving wife Alisha of the home; three children: Kailey, Sean and Zachary Cartwright of the home; his father: Charles “Bully” Cartwright of Leander, TX; two brothers: John (Debbie) Cartwright of Jonestown, TX and Steve Cartwright of Austin, TX; one sister: Dianne (John) Ross of Oxford FL; father and mother in-laws: David and Johnna Wilson of Devils Elbow, MO; three nephews: David Willson of Waynesville, MO, Michael Cartwright of Jonestown, TX and Eric Ross of Oxford, AL; two nieces: Sondra Stokes of Oxford, FL and Heather Ross of Orlando, FL; other relatives and friends. Charlie was preceded in death by his mother, Maudie Odell Cartwright and one sister-in-law, Kimberly Moore. Services were held at 12:00 p.m. Monday, April 23, 2018 in the St. Robert Bellarmine Catholic Church of St. Robert, Missouri with Father John Groner officiating. Music was provided by Evelyn Horine and serving as escorts were Sean Cartwright, David Willson, Patrick Wadleigh, Michael Cartwright, Jesse Moore, Mark Leathers, Leonard Lowrie and Roy Beeson. Serving as honorary escorts were Billy Cartwright, John Cartwright, Duane Martin, David F. Wilson, Dave Moore and Mike Bassett. Burial with military honors followed in the Missouri Veterans Cemetery of Waynesville. Military honors were provided by the United States Army of Fort Leonard Wood, Missouri. Services were under the direction of Memorial Chapels and Crematory of Waynesville / St. Robert.

Charlie Cartwright, son of Charles and Maudie (Janise) Cartwright, was born November 9, 1958 in Bay City, Texas. As a young boy he grew up in Leander, Texas and after graduating from high school, he entered the United States Army and served... View Obituary & Service Information

The family of Charles "Charlie" Edward Cartwright created this Life Tributes page to make it easy to share your memories.