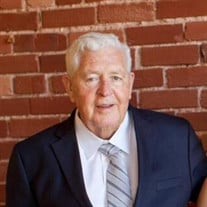 Charles LeClair Collins, son of George and Emma (Brown) Collins, was born November 24, 1940 in Pulaski County, Missouri. He went home to be with the Lord Tuesday evening, June 2, 2020 in his home after a hard-fought battle with congestive heart failure at the age of 79. Charlie grew up in Waynesville, Missouri. He began working from a young age shining shoes at Ft. Leonard Wood and bagging groceries at Dodd’s Market. He graduated from Waynesville High School. He loved growing up in the 50’s, hot rodding and having fun. At nineteen, he was working at the Greyhound Bus Station when he met Violet Anderson who was traveling to and from Springfield, where she lived and worked. They married soon after and started their family right away, having their son Terry first, then their daughter Shelly, four years later. They had a millionaire’s family, but it was often a struggle to make ends meet. Charlie began working at the Waynesville Post Office in 1967, while he continued working at the bus station. He worked both jobs for 10 years. He retired from the Post Office after 30 years of service. He was regarded as a fun character and loved by the community. He was a long-time member of the Waynesville Masonic Lodge #375 AF & AM and wore his ring proudly. Charlie’s life with his family was full of simple joys; time on the river or lake, taking care of their home, family gatherings, and road trips that made life complete. He loved riding horses and had many special pets, especially his Dachshunds. After retirement he and Violet moved to Springfield, Missouri. He enjoyed life in the bigger city. They enjoyed RVing and fishing in Branson. This was the time of their lives. Charlie was heartbroken when he lost Violet in 2011 to Alzheimer’s after more than 50 very special years of marriage. He was a loving and courageous husband who cared for her in their home until the end. Charlie unexpectedly found love again with Kay Thompson, who had been a visitor with Hospice, a retired R.N. who brought light back into his life. They spent seven wonderful years of marriage together. They enjoyed each other’s company by laughing, loving one another, simply spending their time together. Kay provided a loving and peaceful setting for Charlie to depart this life. Charlie will be sadly missed by all those that knew and loved him. He leaves to cherish his memory, his wife: Kay of Springfield, MO; his son: Terry Collins (Carol) of Waynesville, MO; his daughter: Charlene “Shelly” Cherner (Gary) of Cumming, GA; Kay’s girls: Erin Elizabeth of Bluffton, OH, Melanie of Round Rock, TX and Chrissta of Round Rock, TX; four grandchildren: Kyle Collins (Allison) of Tuscon, AZ, Trevor Collins (Sarah) of Lee’s Summit, MO, Philip Cherner of Cumming, GA and Audrey Cherner of Cumming, GA; two great grandchildren: Kayden and Lyric Collins; two sisters: Jean Alto-Irwin of Clermont, FL and Joyce Tonroy of Columbia, SC; several nieces, nephews, other relatives and friends. Charles was preceded in death by his father, George L. Collins (1970), his mother, Emma Collins (2001), two brothers: Virgil Collins (1984) and Ronald Collins (2009), and one sister, Georgia McIntosh (1991). Funeral services will be held at 1:00 p.m. Sunday, June 7, 2020 in the Memorial Chapels and Crematory of Waynesville / St. Robert. Private burial will be in the Waynesville Memorial Park Cemetery of Waynesville. There will also be a live stream of the funeral service available at the start of service time through our Facebook page, Memorial Chapels & Crematory. Visitation will be held from 12:00 p.m. until time of service at 1:00 p.m. Sunday, June 7, 2020 in the funeral home. Memorial contributions may be made in memory of Charles L. Collins to the Waynesville R-VI Alumni Association and may be left at Memorial Chapels and Crematory of Waynesville / St. Robert.

Charles LeClair Collins, son of George and Emma (Brown) Collins, was born November 24, 1940 in Pulaski County, Missouri. He went home to be with the Lord Tuesday evening, June 2, 2020 in his home after a hard-fought battle with congestive heart... View Obituary & Service Information

The family of Charles LeClair Collins created this Life Tributes page to make it easy to share your memories.