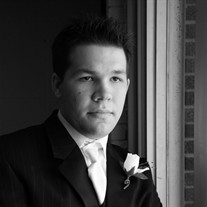 Charles Warren “Chuckie” Fairchild, son of Charles Ira and Annette Suelynn (Clark) Fairchild, was born March 14, 1987 in Ft. Sill, Oklahoma. At the age of 5 months old, Chuckie and the family moved to the Fort Leonard Wood area. He attended and graduated from Laquey High School. While still in high school, Chuckie worked at the Buckhorn Bowling Alley for a time before moving to Whidbey Island, Washington with Jessica after graduating from high school. After living in Washington for a few years, he then moved to Grain Valley. Chuckie worked for Comcast for 8 years traveling the country training people and later went to work for Enterprise Rent a Car. On March 16, 2007, Chuckie was united in marriage to his high school sweetheart, Jessica Lynn Warner. They were blessed with one daughter, Emma Belle. Chuckie was the best dad and husband and his daughter was the apple of his eye. In his spare time, Chuckie was an avid football fan, especially of the Pittsburg Steelers. He loved cars, particularly Mustangs and he also enjoyed playing fantasy football. Most importantly, he loved spending time with his family and friends. Chuckie passed away December 9, 2014 in his home having attained the age of 27 years, 8 months and 25 days. He will be sadly missed but fondly remembered by all those that knew and loved him. Chuckie leaves to cherish his memory his parents: Charles and Annette Fairchild of Waynesville, MO; wife: Jessica Fairchild and daughter: Emma Belle; one sister: Amanda Snyder (Michael) of Lake Charles, LA; one brother: Zachariah Fairchild of Waynesville, MO; paternal grandmother: Dorothy Fairchild of Corpus Christi, TX; mother-in-law: Judi Ann Warner of Independence, MO; grandmother-in-law: Anna Howington of Independence, MO; cousins: Joey and Brandon Fairchild and Jonathon and Douglas Clark; niece and nephews: Amber Snyder, Curtis Natur, Mikey Snyder and Gabriel Snyder; other relatives and friends. Chuckie was preceded in death by his grandparents: Harold and Nancy Fairchild and Jerry and Allie Clark; and his father-in-law: Joe Ray Warner. Services were held at 2:00 p.m. Sunday, December 14, 2014 in the Buckhorn Baptist Church of Buckhorn, Missouri with Pastor Larry Atkins officiating. Ruth Ann Justus sang “Temporary Home”, Matt Atkins sang “Movin’ On” and the song “Butterfly Kisses” was played. Burial followed in the Buckhorn Cemetery of Buckhorn, Missouri. Services were under the direction of Memorial Chapels and Crematory of Waynesville / St. Robert. A memorial has been established for the family and memorial contributions may be made in memory of Chuckie Fairchild and may be left at the funeral home.

The family of Charles Warren "Chuckie" Fairchild created this Life Tributes page to make it easy to share your memories.