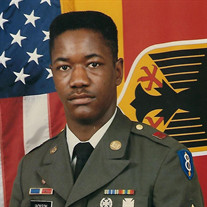 SSG (Ret) Charles Anthony Jackson, son of the late Lemuel Jackson and Mattie Bell (Perry) Jackson, was born March 8, 1960 in Warren, Ohio and graduated from Howland High School with the Class of 1978. In 1986, Charles entered the United States Army and served his country faithfully until his retirement in 2008. During his time in the military, Charles was stationed in Germany, Kentucky, Saudi Arabia, and Texas and at the time of his retirement he was stationed at Fort Leonard Wood, Missouri where he remained. For his faithful service, he earned several awards and commendations and attained the rank of Staff Sergeant. After retiring from the military, Charles was employed with BRTRC from 2008 until the time of his passing. He was a hardworking man and he loved having side jobs, of which he would have two or three at a time. In his spare time, Charles had a great love for bowling and would bowl seven days a week unless the Miami Dolphins were playing. He loved his Miami Dolphins! He also enjoyed shooting pool. He was the champ and if you decided to bet on a game, he had no trouble taking your money because he would win every time. Above all, Charles loved his family and would often put them ahead of himself. He was a loving father, brother and friend. Charles was blessed with two children and he thought the world of his two babies. HE LOVED HIS KIDS! Charles was loved by everyone who crossed his path. He was a loving, kind, caring, and compassionate man that never had a bad thing to say about anyone. He will be sadly missed by all those that knew and loved him. Charles leaves to cherish his memory his son: Charles “Anthony” Jackson, Jr. of St. Robert, Missouri; his daughter: Ashley Nichole Jackson “Baby Lubbins” of Houston, Texas; former spouse: Judy of Waynesville, Missouri; seven siblings: Arthur Perry (Jackie), Theresa Perry, Kenny Jackson (Debbie), L’Tonya Jones-Baugh (Lamar), Teddy Jackson (Marcy) and Kelvin Jackson, all of the state of Ohio and Eric “PeeWee” Jackson of St. Robert, Missouri; several nieces, nephews, other relatives and friends. Memorial services were held at 12:00 p.m. Friday, June 29, 2018 in the Westside Baptist Church of Waynesville, Missouri. Arrangements were under the direction of Memorial Chapels and Crematory of Waynesville / St. Robert.

The family of SSG (Ret) Charles Anthony Jackson created this Life Tributes page to make it easy to share your memories.