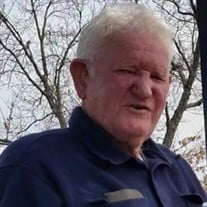 Charles Dale Tallant, one of seven children of the late John Douglas and Katy Myrtle (Marlow) Tallant, was born October 27, 1931 in Chillicothe, Texas. At the tender age of nine, Dale made a profession of faith and was baptized in Young, Arizona. Dale graduated from high school in Eugene, Oregon with a football scholarship to play for Oregon State. Instead of continuing on to college with his football scholarship, Dale, along with eighteen of his classmates, decided to enlist in the United States Navy to serve in the Korean Conflict. Dale served on the USS Sproston from June 19, 1951 to June 7, 1955 and graduated from Signalman School and served as Master at Arms and Signalman on the USS Sproston. On December 9, 1955, Dale was united in marriage to Patricia L. Hedley in Salem, Missouri. They shared over 62 years of marriage together and were blessed with three children: Rick, Andrea and Sharon. Dale and Pat made their home near St. Robert and he was very active in their community. He served on the Pulaski County Ambulance Board, Lion’s Club, Chamber of Commerce, Soil & Crop Committee, and the Waynesville Masonic Lodge #375 AF & AM. Dale was a charter member of the Hickory Hills Baptist Church of St. Robert where he was very active and served as a deacon and the Sunday School Superintendent. In his spare time, Dale enjoyed being outdoors. He loved to farm, work in his garden (he was known for being able to grow some of the best tomatoes) and hunting. Most importantly, he loved being with his family and spending time with them. Dale went home to be with his Lord Friday, September 14, 2018 in his home having attained the age of 86 years. Dale leaves to cherish his memory, his wife: Pat Tallant of the home; three children: Rick (Cathy Hamil) Tallant of Lake Ozark, MO, Andrea Lewis of Waynesville, MO and Sharon (Mike) Swenson of St. Robert, MO; two grandchildren: Amber Leigh and Edward “Trey” (Courtney) Lewis; three siblings: Joyce Lee Carter, Billy L. Tallant and Beth Ann (Ahmed) Mokhtar; several nieces, nephews, other relatives and friends. In addition to his parents, Dale was preceded in death by two brothers: Lewis Darrel Tallant and Leasle C. Tallant; one sister: Mary Phloreene Carter; along with several brother and sister-in-laws. Dale will be sadly missed, but fondly remembered by all those that knew and loved him. Services were held at 12:00 p.m. Wednesday, September 19, 2018 in the Memorial Chapels and Crematory of Waynesville / St. Robert with Pastor Mark Tallant, Pastor Leo Gladden and Pastor Richard Breeden officiating. Becky Lercher sang “Lily of the Valley” and led the congregation in singing “Victory in Jesus” and “When We All Get to Heaven”. Serving as escorts were Adam Dobeinski, Mike Swenson, Mike Wilson and Adam, Brian and Kyle Tallant. Serving as honorary escorts were Jim Bolton, DeWayne Baker, Trey Lewis and Dizzy Carver. Burial followed in the Waynesville Memorial Park Cemetery. In lieu of flowers, the family requests memorial contributions be made in memory of Dale Tallant to Integrity Hospice and may be left at the funeral home.

Charles Dale Tallant, one of seven children of the late John Douglas and Katy Myrtle (Marlow) Tallant, was born October 27, 1931 in Chillicothe, Texas. At the tender age of nine, Dale made a profession of faith and was baptized in Young,... View Obituary & Service Information

The family of Charles Dale Tallant created this Life Tributes page to make it easy to share your memories.

Charles Dale Tallant, one of seven children of the late John...