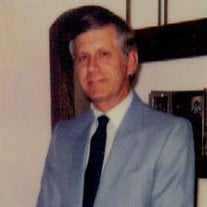 Charles Edward “Chuck” Thompson, Jr., son of the late Charles Edward and Maudie Ruth (Mears) Thompson, was born August 9, 1937 in Marshall, Arkansas. As a young boy, Chuck and his family moved to Hooker, Missouri and grew up in the Waynesville area where he attended school and graduated with the Waynesville High School Class of 1957. For a short time, Chuck worked for Western Auto before beginning a 30 year career as a County Health Inspector for the State of Missouri. In his spare time, he enjoyed fishing, hanging out with his coffee club, and volunteering in the community. Chuck had made a profession of faith and was a longtime member of the First Christian Church of Waynesville. He loved serving at his church and would take communion to those that were not able to attend services. He was also a member of the Shrine Club Motor Corps, and the Waynesville Masonic Lodge #375 AF & AM. He served on various committees pertaining to his work and also served several terms on the Waynesville R-VI School Board over the years. Chuck went home to be with his Lord Monday, January 8, 2018 in the Mercy Hospital of Lebanon, Missouri having attained the age of 80 years. He will be sadly missed, but fondly remembered by all those that knew and loved him. Chuck leaves to cherish his memory, his two sons: Charles Thompson (Deanna) of Waynesville, MO and Ryan Thompson of Waynesville, MO; sister: Carolyn Sue Savage of Nixa, MO; sister-in-law: Opal Thompson of Nixa, MO; many nieces, nephews, other relatives and friends. In addition to his parents, Chuck was preceded in death by three brothers: Jim, Freddie and Kenny Thompson; and one sister: Geneva Thompson Treat. Services were held at 1:00 p.m. Wednesday, January 10, 2017 in the Memorial Chapels and Crematory of Waynesville / St. Robert with Pastor Roy Gilkey officiating. The songs “The Old Rugged Cross” and “How Great Thou Art” were played. Serving as escorts were Ron Seymour, Tommy Peterson, Tyler Thornton, Jacob Thornton, Mike Rouse and J.T. Roberts. Serving as honorary escorts were Roy Nichols and Gary Wann. Burial followed in the Waynesville Memorial Park Cemetery of Waynesville. Memorial contributions may be made in memory of Charles Thompson to the First Christian Church and may be left at the funeral home.

The family of Charles E. "Chuck" Thompson Jr. created this Life Tributes page to make it easy to share your memories.