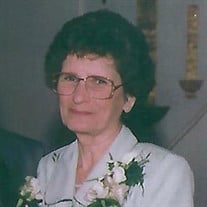 Cherie Nell (Dissman) Milne, daughter of the late Cecil A. and Bessie (Knott) Dissman, was born May 9, 1930 in Havana, Illinois. She passed away Friday, November 9, 2018 in the Eldon Nursing and Rehab Center of Eldon, Missouri having attained the age of eighty-eight years. At the age of nine, Cherie and her family moved to Little America, Illinois where she grew up and graduated from high school in Lewiston, Illinois with the Class of 1948. On May 10, 1958, Cherie was united in marriage to Gordon James “Scottie” Milne at McGuire Air Force Base in New Jersey. Cherie and Scottie blended their family to share four children: Rebecca, Gary, Cherie and Gordon Jr. Due to Scottie being in the military, Cherie and the family were transferred to several different places during his time in the service. Cherie was always able to find work and was a hard worker. She worked for Sears, secretary for a cable company and later for a school and while in England she was a cashier at the NCO gift shop. In July of 1978, Cherie, Scottie and their family moved to Eldon, Missouri where they made their home until moving to St. Robert in August 1991. While in Eldon, Cherie worked at the Taylors Appliance Center and she and the Taylors became dear friends. In her spare time, Cherie loved to read, especially her Bible every morning and do picture and crossword puzzles. She and Scottie loved to go square dancing and she would make several of her outfits. In her younger years, she enjoyed to crochet. Cherie was a member of the VFW Ladies Auxiliary #2442 in Eldon. In the early 1970’s, Cherie was heavily involved with a POW/MIA organization and went to Washington, D.C. to protest for those missing in action and prisoners of war. Cherie leaves to cherish her memory, her two children: Rebecca Gray-Smith (Sammy) of Waynesville, MO and Gordon James Milne, Jr. (Gale) of Belleview, NE; one brother: Pat Dissman (Leigh Ann) of Sebring, FL; eight grandchildren; several great and great-great grandchildren; daughter-in-law: Pam Gray of Rosewood, IL; several nieces, nephews, other relatives and friends. In addition to her parents, Cherie was preceded in death by her husband, Scottie Milne; daughter, Cherie Jeannie (Gray) Stufflebean; son, Gary Gray; and two brothers: Larry and his wife Jean Dissman and Bobby Dissman. Services were held at 1:00 p.m. Tuesday, November 13, 2018 in the Memorial Chapels and Crematory of Waynesville / St. Robert with Chaplain Les Cassil officiating. The songs “Amazing Grace” and “In the Garden” were played. Serving as escorts were Jason Ploss, Mark Smith, Greg Dissman, Cody Havens, Cody Gray and Sammy Smith. Burial followed in the Missouri Veterans Cemetery of Waynesville, Missouri. Memorial contributions may be made in memory of Cherie Milne to the American Cancer Society and may be left at the funeral home.

Cherie Nell (Dissman) Milne, daughter of the late Cecil A. and Bessie (Knott) Dissman, was born May 9, 1930 in Havana, Illinois. She passed away Friday, November 9, 2018 in the Eldon Nursing and Rehab Center of Eldon, Missouri having attained... View Obituary & Service Information

The family of Cherie Nell Milne created this Life Tributes page to make it easy to share your memories.

Cherie Nell (Dissman) Milne, daughter of the late Cecil A. and...