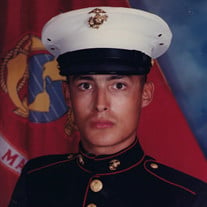 Christopher Brian Jowers, son of Madeline M. Shackleford and Jay Jowers, was born August 21, 1972 in Las Vegas, Nevada. Due to his family being a military family, Christopher attended school in Florida, Missouri, Alaska, and Germany. As a young boy, Christopher attended the Catholic church and served as an altar boy. Shortly after graduating from high school, Christopher enlisted in the United States Marines and served for a little over three years before being honorably discharged. He then entered the United States Army and retired having attained the rank of Sergeant. He had earned several awards and commendations; some of which include: Army Good Conduct Medal (2nd Award), National Defense Service Medal, Army Service Ribbon, Sea Service Deployment Ribbon, and the Expert Marksmanship Qualification Badge with Rifle Bar. In his spare time, Christopher enjoyed fishing, hunting, and spending time with his family and friends. Christopher passed away Wednesday, November 25, 2020 in his home having attained the age of 48 years. He will be sadly missed, but fondly remembered by all those that knew and loved him. Christopher leaves to cherish his memory, his mother: Madeline M. Shackleford and husband Richard of St. Robert, MO; father: Jay Jowers and wife Arnita of Macon, GA; one sister: Jamie Coaston of St. Louis, MO; one brother: Jeffery Jowers of Mexico, MO; aunt and uncle: Maxine DeFelice and Augustine Diaz, both of the state of California; several other relatives and friends. Christopher was preceded in death by paternal grandparents: Fred and Mary Diaz; maternal grandparents: Horace and Helen Jowers; and stillborn son: Matthew Trenton Jowers. Graveside services with military honors were held at 3:00 p.m. Friday, December 4, 2020 in the Missouri Veterans Cemetery with Chaplain (MAJ) Jonathan Melendez officiating. Honors were provided by the Missouri Honors Team. Services were under the direction of Memorial Chapels and Crematory of Waynesville / St. Robert. Memorial contributions may be made in memory of Christopher Jowers and may be left at Memorial Chapels and Crematory of Waynesville / St. Robert.

The family of SGT (Ret) Christopher Brian Jowers created this Life Tributes page to make it easy to share your memories.