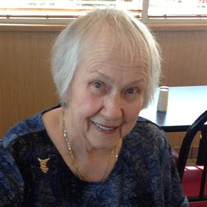 Clara “Jean” Schupbach, daughter of Marion Brown and Lillian E. (Prock) Day, was born March 16, 1939 in Texas County, Missouri. She grew up in the Buckhorn, Missouri area and attended Waynesville High School. On January 25, 1979, Jeannie was united in marriage to Stanley L. Schupbach in West Palm Beach, Florida. Upon their union, two families were blended and they raised three children: Doug, David and Duke. For a time, Jeannie lived in St. Louis, Missouri worked for KMOX Radio. After moving back to the Waynesville / Buckhorn area, she began working for Witmor Farms before working for George Berry in the Pulaski County Collector’s Office. After leaving the collector’s office, Jeannie began working at Interstate Food Mart in Buckhorn until she retired. Upon retiring, Jeannie was able to do more of the things she enjoyed. She loved going on trips with her friends, especially to Branson and any Gospel Singing they could get to. She and Stan also went to many Gospel Singings in the area. Jeannie was an avid collector of many things and was known for baking and decorating cakes for many years. Jeannie had made a profession of faith at an early age and she went home to be with her Lord Wednesday, November 7, 2018 in her home following a long battle with cancer having attained the age of seventy-nine years. Jeannie leaves to cherish her memory, her husband: Stan Schupbach of the home; three children: Douglas Collins of Waynesville, MO, David Collins of San Diego, CA and Duke Schupbach of Springfield, MO; five grandchildren: Kelsi Collins, Tayler Collins, Candace Winkler, John Schupbach and Emma Schupbach; four brothers: Clay Brown of Waynesville, MO, Robert Brown of Branson, MO, Larry Brown of Waynesville, MO and Gary Day of Camdenton, MO; nieces and nephews: Ashley Day, Shalon Day, Diane Ritchie, Debbie Potts, Kimberly Brown, Cindy Forhan, Molly Brown and Matthew Brown; other relatives and friends. Jeannie was preceded in death by her mother: Lillian Day; stepfather: Fred Day; father: Marion Brown; and one brother: Otis Brown. Services were held at 1:00 p.m. Wednesday, November 14, 2018 in the Memorial Chapels and Crematory of Waynesville / St. Robert with Pastor Danny Graves officiating. Becky Lercher sang “Celebrate Me Home”, “It Is Well With My Soul” and “Amazing Grace”. Serving as escort were Duane Gan, Carrol Hendrix, David Collins, Doug Collins, Gene Williams and Mark Forhan. Burial followed in the Missouri Veterans Cemetery of Waynesville. Memorial contributions may be made in memory of Jean Schupbach and may be left at the funeral home.

The family of Clara Jean Schupbach created this Life Tributes page to make it easy to share your memories.