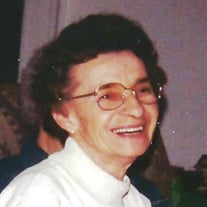 Claudette Andree Miller, daughter of Eugene and Alice (Epain) Coulon was born on September 17, 1935 in Oyre` France. She grew up in Ingrandes, France and later worked in Châtellerault, France. In 1953, Claudette began working the graveyard shift for the American government as a telephone operator in order to take care of her ill father during the day until his passing in 1963. While working, Claudette met a very nice soldier via the phone in 1963. Little did she know that day, Jackie Bruce Miller would become the love of her life, and the man she would later marry on August 11, 1965, in Baltimore, Maryland. “Claudette adored her Jacq!” The couple made their way to the small town of Richland, Missouri in 1967. Claudette began working at the local HD Lee Factory as well as, the Richland Care Center. In June of 68, she and Jackie purchased their home where Claudette still lived until her passing. During one of Brother Paul Swadley’s messages, Claudette made a profession of faith while attending Grace Baptist Church in Richland, Missouri. She later was baptized by Brother Schrimpsher. Claudette attended Grace as often as her health would allow; and enjoyed her extended church family, as they did her. Claudette’s interests included yard work, gardening, sewing, cooking, baking her delicious cream puffs, and keeping up with current events. She was a member of the Order of the Eastern Star Success Chapter #87 in Richland. On June 14, 1982, Claudette’s life and dreams were shattered by the death of her precious husband, Jack. Her life was centered around him. Claudette eagerly anticipated and yearned to be with her beloved husband; and on the morning of Monday, January 27, 2020, Claudette’s wishes to be reunited with Jack and her Lord came true as Heaven’s gate opened wide. She had obtained the age of 84 years, 4 months, and 10 days. She was also preceded by one brother, Pierre Coulon, and son-in-law, Pierre Robert De. La. Motte She leaves behind to cherish her memory, two daughters: Frances F. De. La. Motte of Paris, France and Florence L. Mangin (Christian) of Bordeaux, France; three brothers: Serge, Hubert and Claude Coulon, all of France; one sister: Madelain Ospelt of France; several grandchildren; very special friends: Eric Moore of Richland, MO, Brian Moore of Lebanon, MO, Karol Evans, Sonja Evans and Julia Roe all of Richland, MO; nieces, nephews other relatives and friends. An Eastern Star service began at 12:45 P.M. until time of funeral service at 1:00 P.M., Friday, January 31, 2020, in the Memorial Chapel of Richland with Bro. Bob Lilly officiating. Claudette’s daugter, Frances De. La. Motte opened with a prayer for her mother. Music selections included, “In the Garden” and “Love Lifted Me.” Eric Moore, Brian Moore, Stevan Bartlett, John Parrish, Gerry Frank and Barry Oursbourn served as escorts. Burial followed at 2:00 P.M., in the Missouri Veterans Cemetery, Waynesville, Missouri. Services were under the care and direction of Memorial Chapel of Richland. Memorial contributions may be made in Claudette’s memory and may be left at the Memorial Chapel of Richland. Online condolences may be made at www.memorialchapelsandcrematory.com

Claudette Andree Miller, daughter of Eugene and Alice (Epain) Coulon was born on September 17, 1935 in Oyre` France. She grew up in Ingrandes, France and later worked in Châtellerault, France. In 1953, Claudette began working the graveyard... View Obituary & Service Information

The family of Claudette Andree Miller created this Life Tributes page to make it easy to share your memories.