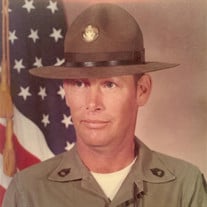 Clayton Dee Howery, son of the late Wesley W. and Meta Kjestine (Bennetzin) Howery, was born September 26, 1941 in Cheyenne, Wyoming. As a young boy, Clayton grew up in LaGrange, Wyoming and graduated from LaGrange High School in 1959. After graduating from high school, Clayton joined the United States Army and retired in 1986 after having attained the rank of First Sergeant. For his faithful service, Clayton earned several awards and commendations. During his time in the military, Clayton was stationed at Fort Leonard Wood, Missouri three different times and at the time of his retirement, he decided to stay in the area. On July 8, 1983, Clayton was united in marriage to Louise M. Roberson. They shared over 25 years of marriage together before she preceded him in death on July 20, 2008. After retiring from the military, Clayton began driving a truck for Prime Inc. in Springfield, Missouri. He retired in 2001 and was then able to do more of the things that he enjoyed. He liked to go to antique tractor shows and anything that had to do with antique tractors. On September 5, 2009, Clayton was united in marriage to Linda Lee (Hauschild) Keener in St. Robert, Missouri. They shared over 7 years together and many wonderful memories. Clayton passed away Saturday, July 8, 2017 in the Phelps County Regional Medical Center of Rolla, Missouri having attained the age of 75 years, 9 months and 12 days. He will be sadly missed, but fondly remembered by all those that knew and loved him. Clayton leaves to cherish his memory, his wife: Linda Keener-Howery of the home; two children: Jennifer (Mike) Wallis of Shawnee, KS and Wayne Howery of St. Robert, MO; one stepson: Roger (Michelle) Keener of Versailles, MO; five siblings: Clinton Howery of Dillon, MT, Elaine Howery and Eileen McKay of Island Park, IN, Marvin Howery of North Platte, NB and Martin Howery of Ainsworth, NB; 6 granddaughters: Sara, Elizabeth, Justine, Julia, Isabelle and Chelsea; 3 step grandchildren: Harrison, Lucas and Paul; 3 great grandsons: Graham, Reid and Henry; other relatives and friends. In addition to his parents and first wife, Clayton was preceded in death by one son: Don Copeland. Graveside services with military honors were held at 11:00 a.m. Friday, July 14, 2017 in the Vienna City Cemetery of Vienna, Missouri with Pastor John Perling officiating. Military honors were provided by the United States Army of Fort Leonard Wood, Missouri. Services were under the direction of Memorial Chapels and Crematory of Waynesville / St. Robert. Memorial contributions may be made in memory of Clayton Howery to the Faith Lutheran Church of St. Robert and may be left at the funeral home.

The family of 1SGT (Ret) Clayton Dee Howery created this Life Tributes page to make it easy to share your memories.