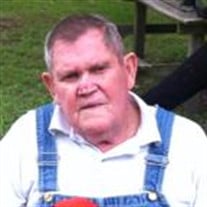 Clifford Lee “Buster” Henson, one of nineteen children born to the union of the late Everett and Lyndale (Chaffin) Henson, was born July 20, 1936 in Richland, Missouri where he grew up and attended school. In 1954, at the age of 18, Buster married Ruby L. Masters and on August 16, 1955 they were blessed with the arrival of their daughter, Penny. In 1962, Buster married Georgia “Georgee” I. Fike, and on June 14, 1963, they were blessed with the arrival of their daughter, Mary. Georgee was tragically killed in an automobile accident. On June 28, 1986, Buster was united in marriage to Carolyn Ann Morton in Crocker, Missouri. They shared over 28 years of marriage together. Buster was a hardworking man. In 1953, he worked for MFA loading 100 lb. sacks of feed all day. He later that same year began working for Pineline Shell Company where he cleaned out old machinery. In 1955, Buster went to work for Richline / Playcraft as a boat loader, forklift operator and foreman. He worked there until his retirement in 2005. After retiring, Buster was able to do more things that he enjoyed. He loved being outdoors while fishing raising rabbits and chickens and working in his garden. He also enjoyed dancing and most importantly, treasured the time spent with family and friends. Buster professed his faith in Jesus Christ as an early age and was baptized at Maranatha Baptist Church of St. Robert on October 11, 1987. He was attending First Baptist Church of Richland at the time of his passing. Buster went home to be with his Lord Friday, November 7, 2014 in the Lake Regional Health System of Osage Beach, Missouri having attained the age of 78 years. Buster leaves to cherish his memory, his wife Carolyn of the home: two daughters: Mary Shelton (Rick) of Kansas City, MO and Penny Fry (Rick) of St. Robert, MO; three brothers: Everett Henson (Helen) of Myrtle Beach, SC, Terry Dean Henson (Joyce) of Richland, MO and Paul Dennis Henson (Kathy) of Camdenton, MO; four sisters: Mary Dorothy Skinner (Larry) of IN; Neomia Randall (Don) of the state of WY, Phyllis Wilson (William) of Lebanon, MO and Lyn Parker (Larry) of Kansas City, KS; 4 grandchildren: Sean and Jennifer Fry, Scott Shelton; Krystle Curtis; 8 great-grandchildren and 1 great-great grandchild; several other relatives and friends. In addition to his parents and wife Georgee, Buster was preceded in death by two infant children; two sisters: Wanda and LaVena; seven brothers: LeRoy, Willard, Alford, Charles, Wayne, Leonard and Jack Henson; and two infant brothers. Funeral services were at 11:00 a.m., Tuesday, November 11, 2014, in the Memorial Chapel of Richland with Pastor Bob Lilly officiating. Granddaughter, Jennifer Fry read the eulogy. Favorite music selections included “Amazing Grace” and “The Old Rugged Cross.” Serving as escorts were Kyle Fry, Sean Fry, Rick Fry, Krystle Curtis, Scott Shelton and Rick Shelton. Honorary escort was Stan Barba. Burial followed in the Oaklawn Cemetery of Richland. Services were under the direction of Memorial Chapel of Richland.

Clifford Lee &#8220;Buster&#8221; Henson, one of nineteen children born to the union of the late Everett and Lyndale (Chaffin) Henson, was born July 20, 1936 in Richland, Missouri where he grew up and attended school. In 1954, at the age... View Obituary & Service Information

The family of Clifford Lee "Buster" Henson created this Life Tributes page to make it easy to share your memories.

Clifford Lee “Buster” Henson, one of nineteen children born to...