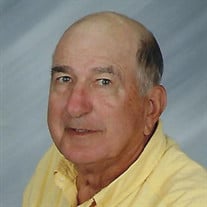 Clifford Lew “Coon” Tucker, son of the late Reed Parsons Tucker and Pearl Elizabeth (Trower) Tucker, was born in the back of his dad’s barber shop on January 22, 1944 in Richland, Missouri where he grew up and graduated from high school. As a teenager and into his early twenties, Coon (as he was known by his family and friends) worked for H.E. Warren and Sons. On November 19, 1966, Coon was united in marriage to Sharon Kaye Lawrence. They shared over 53 years of marriage together and were blessed with two sons: James and Tim. Coon worked hard to provide for his family and over the years worked for different companies. He worked for Richline Boat Factory, H.D. Lee and most recently worked for the Richland R-IV School District as a bus driver and maintenance until his retirement. He took extra special care of the kids on his bus, especially the little preschoolers. In his spare time, Coon loved everything about the Christmas holiday season. He was like a big kid himself when he would decorate for Christmas, go Black Friday shopping, and buy gifts for the grandkids. In the summertime, he enjoyed working in his garden, where he grew tomatoes, which he loved to distribute to his neighbors, friends, and family. He liked to fix things (just ask his sons how he kept their households running), it did not matter what it was. He also enjoyed pets, especially cats, which he constantly played with and spoiled like crazy. Coon had made an important decision in his life, and accepted Jesus Christ as his Savior. He was a member of the Concord Christian Church and attended every time he was able. Coon went home to be with his Lord Friday, August 21, 2020 in his home having attained the age of 76 years. He will be sadly missed, but fondly remembered by all those who knew and loved him. He leaves to cherish his memory, his wife: Sharon Tucker of the home; two sons: James Tucker (Cindy) of Richland, MO and Tim Tucker (Kristen) of Lebanon, MO; seven grandchildren: Ally Tucker, Katherine Tucker and Becca Tucker all of Springfield, MO, and Ryleigh Tucker, Reagan Tucker, Ethan Tucker and Reese Tucker all of Lebanon, MO; one brother: Frank Tucker of Lebanon, MO; one sister: Ruby Williams of Richland, MO; beloved mother-in-law: Eula Lawrence of Crocker, MO; several nieces, nephews, other relatives and friends. In addition to his parents, Coon was preceded in death by one brother: Ernest Tucker; one sister: Sharon Evans; and one granddaughter: Isabella Tucker. Memorial contributions may be made in memory of Clifford Tucker and may be left at Memorial Chapel of Richland.

Clifford Lew &#8220;Coon&#8221; Tucker, son of the late Reed Parsons Tucker and Pearl Elizabeth (Trower) Tucker, was born in the back of his dad&#8217;s barber shop on January 22, 1944 in Richland, Missouri where he grew up and graduated from... View Obituary & Service Information

The family of Clifford Lew "Coon" Tucker created this Life Tributes page to make it easy to share your memories.