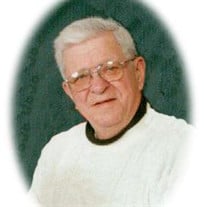 Clyde Edward Coxen, son of Elmer Hansen “Sooner” and Opal (Austin) Coxen, was born March 23, 1933, on the family farm in the Coon Creek Community, near Hartville, Missouri. He departed this life on Sunday, October 30, 2016, in the Hartville Care Center, in Hartville, Missouri, at the age of eighty-three years, seven months and seven days. On February 15, 1958, he was united in marriage to Marilyn LaVonne Cline, and to this union a son and a daughter were born. He was preceded in death by his parents. Clyde is survived by his wife Marilyn, of the home; two children, Edward “Butch” Coxen of Springfield, Missouri, and Amy Posey of Republic, Missouri; two grandchildren, Delaney and James Posey of Republic, Missouri; two sisters, Faye Day of Hartville, Missouri and Maxine Hake and her husband, Richard, of Lake St. Louis, Missouri; a number of nieces and nephews; several brothers-in-law and sisters-in-law; as well as a host of other relatives and many friends. He was born and raised in Wright County where he resided throughout his life. He attended the Coon Creek School growing up and helped out on the family farm. Clyde served his country faithfully and entered the United States Army on July 30, 1953. After he was Honorably Discharged from the service, he returned back to Hartville and helped his parents out on the farm. After he and Marilyn were married they continued to make their home in the Hartville Community. Throughout Clyde’s life he worked for the Brown Shoe Company in Mansfield, MO, was a Route Driver for the Foremost Dairy from 1969 until 1981. He then went to work for the Hutchins Steel Factory in Mansfield, MO, where he worked as a Press Operator. He retired from there and went to work for Jackie Dugger building trusses. Clyde had professed his faith in Christ and was a member of the Hartville First Baptist Church. In earlier year he had attended the Hartville Freewill Baptist Church. He was also a member of the Elmer Sellers American Legion Post #45. He loved his family dearly and found great joy in spending time with his children and grandchildren. In his spare time he enjoyed working in his shop, doing woodworking projects and repairing small engines. He loved the outdoors fishing and going quail hunting. He was especially fond of going to singing in the area. Clyde was a loving and devoted husband, father, grandfather, brother, uncle and friend. He will be greatly missed by all those who loved and knew him. We celebrate his life and accomplishments and will treasure the wonderful memories he has created for his family and many dear friends. He will live on in our hearts forever. Services were held at 1:00 p.m. Saturday, November 5, 2016 in the First Baptist Church of Hartville, Missouri with Rev. Melvin Moon and Rev. Jeff Ward officiating. Pianist Janet Vandergrift accompanied Robin Widner and Carol Robertson as they sang “Come Morning”, “I’ve Never Been This Homesick Before” and “Where the Roses Never Fade”. Serving as escorts were Owen Long, Roy McDaris, Art Vandergrift, Rex Epperly, Jackie Dugger and Jack Lawler. Burial followed in the Coon Creek Cemetery of Hartville, Missouri. Services were under the direction of Memorial Chapels and Crematory of Waynesville / St. Robert.

The family of Clyde Edward Coxen created this Life Tributes page to make it easy to share your memories.