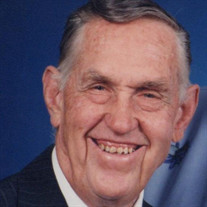 Clyde accepted Jesus in 1943 and was later baptized in a pond next to High Point Church. Clyde met Betty York while working at International Shoe. They married on August 25, 1951, and moved to Texas, where Clyde was stationed in the army. To this union two sons were born. Clyde and Betty returned to Missouri and lived in the Stoutland area before buying a home in Hillhouse where they lived together 55 years and raised their family. Clyde was a hard-working husband and father. He worked at the Richline Boat Factory, Empire Gas, Brown Propane and retired from Ft. Leonard Wood as a boiler operator after 31 years. Clyde did service work on hundreds of furnaces in the Richland area. Clyde served as Mayor of Hillhouse until it was annexed into Richland, served on the Richland Utility Board for 36 years, and was a Deacon at Grace Baptist Church. At the time of his passing, he was the oldest male member at Grace Baptist. In his retirement, Clyde enjoyed drinking coffee while talking about the stock market, politics, and the good ol' days. After 64 1/2 years of marriage, Betty passed away on July 1, 2016. Clyde met and then married Phyllis Rowe on December 10, 2017. They enjoyed their time together, attending church, visiting with family and friends, and eating out. Clyde was preceded in death by his parents, his stepmother Herma Winfrey, and three siblings, Keith and Wayne Winfrey and Dr. Joyce Goldstein. Clyde is survived by his wife Phyllis of the home, two sons: J.M. and wife Karen Winfrey and Bill and wife Glenda Winfrey; five grandchildren: Becci Crowder (Dwight), Jeff Winfrey (Stacie), Tyson Winfrey (Lacey), Allison Berry (Andy), and Jordan Winfrey; six great-grandchildren: Aaron Joy, Kaleb Winfrey, McKinley Berry, Creek Winfrey, Nora Winfrey, Tinsley Berry and Baby Berry expected March 2022; one sister: Jeane Winfrey; sisters-in-laws: Virginia Winfrey, Jan York, and Dorothy Marr (Denny); one brother-in-law: Don Sanders (Katie); special cousins: Nadine Palmer and Charles Brown; two step-children: Shonda Harland and Brent Atterberry; five step-grandchildren: BradLee McPherson, Brandi Elmore, Kody Harland, Eric Atterberry, and Kristi Atterberry; along with many other relatives and friends. Services were held at 11:00 a.m., Friday, October 8, 2021, in the Grace Baptist Church of Richland with Pastor Tre` Shaw and Pastor Matt Brady officiating. Soloist, Denny Marr sang “What A Day That Will Be” and “Beulah Land” before leading the congregation in singing, “When We All Get to Heaven” as pianist, Shonda Harland accompanied. Serving as escorts were Jeffrey Winfrey, Tyson Winfrey, Kaleb Winfrey, Dwight Crowder, Robert Greer and David Roam. Honorary escorts included Charles Brown, Aaron Joy, and Andy Berry. Burial with Military Honors followed in the Oaklawn Cemetery of Richland, MO. Services were under the care and direction of Memorial Chapel of Richland. Memorial contributions are being accepted In Memory of Clyde Winfrey to the donor’s choice and may be left at the funeral home.

Clyde accepted Jesus in 1943 and was later baptized in a pond next to High Point Church. Clyde met Betty York while working at International Shoe. They married on August 25, 1951, and moved to Texas, where Clyde was stationed in the army. To... View Obituary & Service Information

The family of Clyde William Winfrey created this Life Tributes page to make it easy to share your memories.

Clyde accepted Jesus in 1943 and was later baptized in a pond...