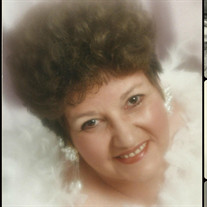 Connie Almeda Shelden, daughter of the late Harold Augustus “Gus” and Ola Almeda (Robertson) McGowan, was born February 7, 1946 in Waynesville, Missouri. At the age of 8, Connie’s mother passed away and Connie’s sister, Pansy Dye and husband Harvey, took Connie in and raised her as their own. From that point on, Connie thought of Harvey and Pansy as her mom and dad and their children as her brothers and sisters. Connie grew up in the Waynesville area and graduated from Waynesville High School with the Class of 1964. On June 26, 1965, Connie was united in marriage to Robert Gary Shelden in Waynesville, Missouri. They shared over 49 years of marriage together and were blessed with one daughter, Kristy. Connie began a career in cosmetology and obtained her license at the age of 19. She worked as a beautician for over 40 years and was the owner and operator of The Hair Stop for many years as well as several other shops. She loved visiting with her clients and missed them tremendously when she retired due to her health. In her spare time, Connie was an avid outdoorsman. She loved to study rocks, fossils, go mushroom hunting, watching birds and working in her flower beds. She could look at a weed and tell you whether you could eat it or not. She had an extensive knowledge of everything outdoors. She also enjoyed painting and needlework. Connie also was a member of a bowling team several years ago. Most importantly, she loved spending time with her family and friends; especially her grandkids who were her pride and joy. Connie had a strong faith and was a member of the Hickory Hills Baptist Church of St. Robert. She depended on her faith to get her through the rough times of having cancer. She never once complained about having the illness to her family or friends. Connie went home to be with her Lord Tuesday, October 14, 2014 in her home after a long and courageous battle with cancer. She will be sadly missed by all those that knew and loved her. Connie leaves to cherish her memory, her husband: Gary Shelden of St. Robert, MO; one daughter: Kristy Lynn Shelden Shupe and husband Michael of Waynesville, MO; two grandchildren: Kristian and Cole Shupe; two sisters: Pansy Dye of Waynesville, MO and Josephine Brandon of Swedeborg, MO. She is also survived by two brothers: Ronnie Dye, and Harvey Lynn Dye, of Waynesville and two sisters: Carolyn Dye of Waynesville, MO and Patty Gambill of Edgar Springs, MO; “adopted” daughter: Kim St. Andre and her daughter Samantha of Frisco, TX; several other relatives and friends. In addition to her parents, Connie was preceded in death by three brothers: Leroy, Harold and Ralph McGowan; two sisters: Margaret Fisher and Edna Lucke; and her dad: Harvey Dye. Services were held at 2:00 p.m. Saturday, October 18, 2014 in the Memorial Chapels and Crematory of Waynesville / St. Robert with Pastor Lindell Shelden and Pastor Leo Gladden officiating. Becky Lercher sang “It Is Well With My Soul” and “Serenaded By Angels”. Serving as escorts were Daniel, Russ, and Brad Shelden, Dylan Donati, Stephen and Jon Dye and Phillip Gambill. Serving as honorary escorts were Kristian Shupe, Cole Shupe, Danny Shelden, Roger Thomas and Earl Wayne Brandon. Burial followed in the Deerlick Cemetery of Waynesville. Services were under the direction of the Memorial Chapels and Crematory of Waynesville / St. Robert. Memorial contributions may be made in memory of Connie Shelden and may be left at the funeral home.

The family of Connie Almeda Shelden created this Life Tributes page to make it easy to share your memories.