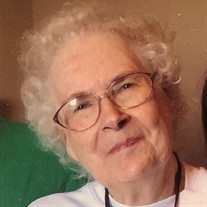 Corliss “Corky” Arnone, daughter of the late Frank and Ilah (Edward) Travis, was born November 30, 1932 in Kansas City, Missouri. As a young girl, Corky and her family moved to Imboden, Arkansas where he father knew they could have a better life. Corky was one of eight children: Beverly, Darrell, Donnie, Corliss “Corky”, Barney, Fairy, Bonnie, Arlyss “Arky”. As a young lady, Corky moved to Washington, DC to work as a secretary. It was there that she met a young man by the name of Melvin Arnone and they fell in love. Melvin proposed to Corky at the base of the Washington Monument and they were united in marriage on May 8, 1952 in Washington, DC. They shared many wonderful years together and were blessed with five children: Rosellen, Mitchell, Joy, Guy and Melanie. In addition to being a wonderful homemaker and mom, Corky was an experienced secretary. Due to Melvin being in the military and having to move to different areas of the country and world, Corky put her secretarial skills to use to help provide for her family. While living in Missouri, she worked at First Baptist Church of Waynesville as a secretary to Pastor Wilbur Harbaugh. While part of First Baptist Church, Corky was responsible for establishing a bus ministry whereby volunteers would establish a Sunday bus route bringing children to church. Over time, the bus ministry grew to include four busses with countless children and their families coming to know and accept Christ in their lives. Corky became inspired and joined the Child Evangelism Fellowship. Her passion was introducing children to Christ. Eventually, she became an area director for CEF and continued to grow her organization leading a number of supporters and volunteers to continue the Lord’s work in reaching out to children. While Corky’s passion was her work with CEF, she was also a member of the local Toasters club and was currently a member of Westside Baptist Church of Waynesville. Corky went home to be with her Lord Thursday, June 6, 2019 in the Life Care Center of Waynesville, Missouri having attained the age of 86 years, 6 months and 6 days. She will be sadly missed, but fondly remembered by all those who knew and loved her. Corky leaves to cherish her memory, her five children: Rose Brimhall of Copperas Cove, TX, Mitch Arnone (Belinda) of Ellicott City, MD, Joy Weimer (David) of St. Robert, MO, Guy Arnone (Teresa) of Montreal, MO and Melanie Estrada of Waynesville, MO; ten grandchildren; four great grandchildren; one great-great grandchild; one sister: Arlyss DeClerk of Pocahontas, AR; several nieces, nephews, other relatives and friends. In addition to her parents, Corky was preceded in death by her husband, Melvin Arnone (1996); and six siblings: Beverly, Darrell, Donnie, Barney, Fairy and Bonnie. Funeral services were held at 1:00 p.m. Monday, June 10, 2019 in the Memorial Chapels and Crematory of Waynesville / St. Robert with Pastor Danny Graves officiating. The songs “Amazing Grace” by Judy Collins, and “Love Lifted Me” and “Welcome to My World” both by Eddy Arnold were played. Serving as escorts were family and friends. Burial followed in the Sunset Memorial Estates Cemetery of Waynesville. Memorial contributions may be made in memory of Corliss “Corky” Arnone to the Child Evangelism Fellowship of Missouri and may be left at Memorial Chapels and Crematory of Waynesville / St. Robert.

Corliss &#8220;Corky&#8221; Arnone, daughter of the late Frank and Ilah (Edward) Travis, was born November 30, 1932 in Kansas City, Missouri. As a young girl, Corky and her family moved to Imboden, Arkansas where he father knew they could have... View Obituary & Service Information

The family of Corliss "Corky" Arnone created this Life Tributes page to make it easy to share your memories.