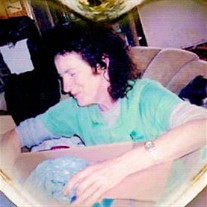 Cory Ann Kidd was born March 8, 1962 in Massachusetts. At the age of 16, Cory moved to Crocker, Missouri to be near her family where she graduated from high school. On November 18, 1996, Cory was united in marriage to Douglas F. Kidd in Columbia, Missouri. They shared many wonderful memories before Doug preceded her in death on November 29, 2013 just shy of their 17th wedding anniversary. Cory attended nursing school and became a Registered Nurse. She began working for Tri County Nursing Home where she served for almost 18 years. She loved taking care of the residents and tried to brighten their days. In her spare time, Cory enjoyed working on puzzles, gardening and taking care of her cats. Most importantly, she loved her family and enjoyed helping provide for them. Her world revolved around her family. Cory passed away Tuesday, March 22, 2016 after a courageous battle with cancer having attained the age of 54 years, 2 months and 14 days. She will be sadly missed, but fondly remembered by all those that knew and loved her. Cory leaves to cherish her memory, her four children: Uddie Kidd, Billy Kidd, Petey Kidd and Shaun Etheridge, all of St. Robert, MO; six grandchildren: Lacey Etheridge, Phoebe Etheridge, Alyssa Etheridge, Bradly Etheridge, Rey Brand and Liam Henderson; one brother: Teddy Hutchins of Crocker, MO; one sister: Linda Manire of the state of Washington; father-in-law: Ray Kidd of Waynesville, MO; numerous nieces, nephews, other relatives and friends. Services were held at 1:00 p.m. Friday, March 25, 2016 in the Memorial Chapels and Crematory of Waynesville / St. Robert with Rev. Carlton Howell officiating. The songs “Stairway to Heaven” by Led Zepplin, “November Rain” by Guns & Roses and “Dog & Butterfly” by Heart were played. Serving as escorts were Uddie Kidd, Shaun Etheridge, Billy Kidd, Petey Kidd, Teddy Hutchins and Jr. Levett. Burial followed in the Mt. Gibson Cemetery of Waynesville. Memorial contributions may be made in memory of Cory Ann Kidd and may be left at Memorial Chapels and Crematory of Waynesville / St. Robert.

Cory Ann Kidd was born March 8, 1962 in Massachusetts. At the age of 16, Cory moved to Crocker, Missouri to be near her family where she graduated from high school. On November 18, 1996, Cory was united in marriage to Douglas F. Kidd... View Obituary & Service Information

The family of Cory Ann Kidd created this Life Tributes page to make it easy to share your memories.